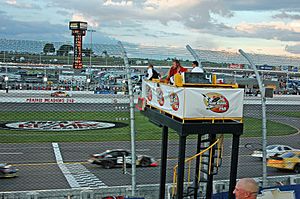 The track opened in September 2006 with the Soy Biodiesel 250, won by Woody Howard, for the USAR Hooters Pro Cup Four Champions playoff. The Indy Racing League announced a race there on June 24, 2007, the Iowa Corn Indy 250, which was won by Dario Franchitti, who barely nipped Marco Andretti at the finish line. The track also secured a combined NASCAR Camping World East-West race where results counted towards both series' championships. That race delivered a dramatic battle between 17-year-old Joey Logano from the Busch East Series, who defeated Daytona 500 champion Kevin Harvick, 1998 West Series champion, who represented the West Series at the end of the race. The track was awarded a NASCAR Camping World Truck Series race and a NASCAR Nationwide Series race in 2009.

On July 5, 2011, it was announced that the Manatt family, builders and primary owners of the Iowa Speedway, through the holding company U.S. Motorsports Corporation, had sold their majority interest to the Clement family, owners of Featherlite Incorporated. "It was our privilege to help build the track five years ago, and like a proud parent, we've enjoyed watching it thrive and grow," said company president Brad Manatt. Featherlite Incorporated already has a long-standing relationship with NASCAR. Many race teams use Featherlite Trailers and Featherlite Coaches for the transport of cars and staff. Rusty Wallace will remain a minority owner in the track.

Following news of financial issues at the track, the facility was purchased by NASCAR by November 2013.

The track has periodically been rumored as a candidate for a NASCAR Cup Series race; in 2013, a bill to allow $8 million in upgrades to the speedway toward that goal began circulating in the Iowa Legislature.

In April 2020, the NASCAR-sanctioned races at Iowa for the 2020 Xfinity and Truck seasons were canceled due to the COVID-19 pandemic. Only the ARCA Menards Series and IndyCar races were held in July, with an extremely reduced number of spectators. After the races, it was reported that the track is for sale following the 2020 season. Iowa Speedway will not host an IndyCar, NASCAR Xfinity Series or NASCAR Camping World Truck Series race in their 2021 seasons.

In December 2020, the ARCA Menards Series announced that Iowa Speedway will host one race on their 2021 schedule in July.

The facility also hosts several driving schools year-round, such as the Rusty Wallace Racing Experience and The Formula Experience, where visitors have the opportunity to experience the speedway from behind the wheel of a race car. 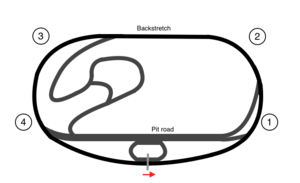 The track was designed with influence from Rusty Wallace and patterned after Richmond Raceway as a D-shaped oval, a short track where Wallace was very successful.

All content from Kiddle encyclopedia articles (including the article images and facts) can be freely used under Attribution-ShareAlike license, unless stated otherwise. Cite this article:
Iowa Speedway Facts for Kids. Kiddle Encyclopedia.