Newton is the county seat and most populous city in Jasper County, Iowa, United States. Located 30 mi (48 km) miles east of Des Moines, Newton is in Central Iowa. As of the 2010 census, the city population was 15,254. It is the home of Iowa Speedway, Maytag Dairy Farms, and the Iowa Sculpture Festival. 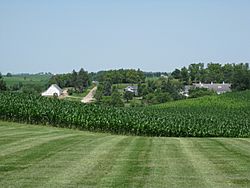 View of Maytag Dairy Farms from the visitor center.

Newton was founded in 1850 and incorporated as a city in 1857. In the late 19th century, Newton's growth was fueled by the development of coal mines in the region. The first significant mine in the area was the Couch mine of the Jasper County Coal and Railway Company, opened in the 1870s. It was, for a while, the largest mine in the county, producing 70 tons per day. William Snooks opened a mine near Newton in 1886. In the early 20th century, large scale mining in the Newton area had declined, but there were still several mines in the area that were worked intermittently.

Maytag and the era of growth 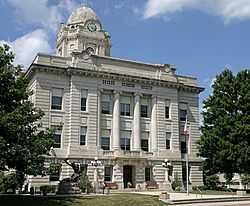 In the 20th century, Newton was a manufacturing community, much of its growth derived from the washing machine industry. Its most distinctive landmark, the Jasper County Courthouse, was built in 1911.

Newton entered the national stage in 1938 when martial law was declared during a strike at the Maytag Washing Machine Company. Iowa governor Nelson Kraschel ordered the Iowa National Guard to protect the company with tanks and machine guns ready against the workers. With the backing of four troops (companies) of the 113th Cavalry Regiment, Maytag company beat the strike and forced workers to return to work with a 10% pay cut. 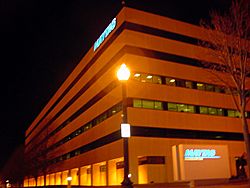 Former headquarters of the Maytag Corporation, sold to Newton Enterprises in April 2012.

At the conclusion of World War II, the Maytag Washing Machine Company expanded its operations in Newton, becoming the Maytag Corporation. Known for its dependable line of washing machines and clothes dryers, the company later persuaded the town of Newton to change the name of its headquarters address in the city to “One Dependability Square.” In 2001, a decision to cut labor costs resulted in a reduction of the labor force at the Newton plant in favor of newer Maytag facilities in Mexico. Layoffs at the Newton plant continued through 2005. Whirlpool's acquisition of Maytag in early 2006 led to speculation over the future of Maytag operations in Newton. On May 10, 2006, Whirlpool announced that it would close the Newton plant and corporate offices in the fall of 2007. The plant employed about 1,000 workers and the corporate offices employed about 800 at the time of the announcement.

In January 2007, Whirlpool said in a statement that it sold most of the Maytag headquarters complex to Iowa Telecommunications Services Inc., a Newton-based telephone company which would use the complex to consolidate employees in a single location.

Although the company did not disclose financial details, Newton economic development officials said Iowa Telecom paid $1.5 million for the buildings assessed at more than $12 million.

"Newton's future" and life after Maytag

After Maytag announced its departure, community leaders and City administration worked together to develop a plan to diversify Newton's economy. After the Maytag plant closed, unemployment skyrocketed—rising to almost 10%. In 2010, Jasper County had the highest unemployment rate of Iowa's 99 counties at 8.2%. However, in the following years, the unemployment rate dropped considerably—down to 5.4% in 2013. More impressively, Newton's population did not drop following the departure of Maytag. Newton has had a steady population of about 15,000 since the 1960s.

One of the industrial sectors Newton has attracted in recent years is green manufacturing. In December 2007, TPI Composites announced plans to open a plant to manufacture massive wind turbine blades, which are now in production. Additionally, Trinity Structural Towers, a company which manufactures wind turbine towers, opened in 2008. President Barack Obama visited the Trinity Structural Towers plant on April 22, 2009, that year's Earth Day. While at the factory in Newton, the President said that he traveled to the factory in order to usher in "a new era of energy exploration in America."

Newton was awarded the National Sustainable Community of the Year Award (Small City Category) by Siemens and the US Chamber of Commerce in 2010 for its successful, pro-active approach to recovery.

In 2012, the Newton City Council passed "Newton's Future: A Comprehensive Plan." The Comprehensive Plan was written with the input of Newton citizens and reflects the community's goals for the future; the top goals identified in the plan were to (1) Grow Newton's population, specifically targeting young families, (2) Increase employment opportunities, (3) Improve the City's curb appeal, and (4) Fill vacant buildings and increase local shopping options.

On August 30, 1969, world boxing champion Rocky Marciano and two other occupants died when their airplane crashed in Newton. This was the third of a series of airplane accidents or incidents in Iowa involving celebrities, after a 1959 accident in Clear Lake and a 1960 incident in Carrol that involved a plane carrying the Los Angeles Lakers basketball team.

Newton has an active arts community, with several non-profit organizations dedicated to the arts and many artists residing in the city.

In addition to the annual Sculpture Festival, Newton features nearly 90 displays of public art with sculptures and painted murals throughout the community. The Iowa Sculpture Festival Committee sponsors a year-round sculpture and mural tour.

In addition to having an active visual arts community, Newton also has an active music and theater community.

Each summer, Newton hosts the Bowlful of Blues, a blues festival at the Maytag Bowl featuring renowned blues artists from across the county such as John Primer, Walter Trout, Shaun Murphy, Willie Kent, and others. Additionally, the City of Newton Parks and Recreation puts on free weekly concerts at the Maytag Bowl throughout the summer in an event called "Evenings at the Bowl." This event features local bands of all genres. The Newton City Band, a full concert band composed of Newton citizens, also performs at this event.

The Newton Community Theater performs several shows each year ranging from large-cast musicals, such as Les Miserables, to small cast ensemble plays, such as The Dixie Swim Club.

Other arts and culture

Newton also hosts the Miss Iowa USA and Miss Teen Iowa USA Pageants annually. The winners of these competitions go on to represent Iowa at the Miss USA Pageants.

Newton is home to one of America's first business aircraft. The aircraft was a Travel Air 6000 owned by Harry Ogg, owner of the Automatic Washing Machine Company and was named "Smiling Thru".

Newton is home to Iowa Speedway, a 7/8 mile racing track purchased by NASCAR in 2014. It is the only short track owned by NASCAR west of the Mississippi River. The track hosts a series of races throughout the summer, including NASCAR Xfinity Series races, NASCAR Camping World Truck Series races, IndyCar Series races, and others.

Newton is home to several parks and recreation areas. The City maintains 13 City parks and recreational areas, including the flagship park of the community, Maytag Park. Maytag Park is on the National Registrar of Historic Places. Amenities at Maytag Park include the Maytag Bowl—a historic bandshell, a public swimming pool, and a disc golf course. In addition to the City parks, Project AWAKE, a local non-profit organization, maintains the Newton Arboretum and Botanical Gardens as well as Sersland Park, a downtown park. The Newton Arboretum and Botanical Gardens occupies six acres of land and features over 150 species of trees, a rose garden, a butterfly garden, a water garden, and a native prairie.

A typical street name would appear "E 5th St S". The east or west label comes first, followed by the street, then followed by the north or south label. This example indicates the street is in the southeast quadrant of Newton.

A typical avenue name would appear "N 5th Ave W". In the case of avenues, the north or south label comes first, followed by the avenue, and then followed by the east or west label. This example indicates the avenue is in the northwest quadrant of Newton.

All addresses within Newton fall within the 50208 ZIP code.

There were 6,668 households of which 28.0% had children under the age of 18 living with them, 44.6% were married couples living together, 11.5% had a female householder with no husband present, 4.6% had a male householder with no wife present, and 39.3% were non-families. 34.6% of all households were made up of individuals and 15.9% had someone living alone who was 65 years of age or older. The average household size was 2.24 and the average family size was 2.85.

There were 6,713 households out of which 29.1% had children under the age of 18 living with them, 51.4% were married couples living together, 9.4% had a female householder with no husband present, and 36.4% were non-families. 32.0% of all households were made up of individuals and 14.1% had someone living alone who was 65 years of age or older. The average household size was 2.25 and the average family size was 2.84.

All content from Kiddle encyclopedia articles (including the article images and facts) can be freely used under Attribution-ShareAlike license, unless stated otherwise. Cite this article:
Newton, Iowa Facts for Kids. Kiddle Encyclopedia.