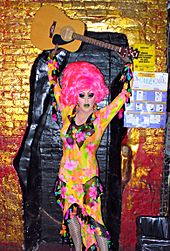 Miss Understood, who has appeared in several films and on television

Drag queen is a gay slang term. It refers to a gay man who dresses and acts like a woman for entertainment purposes. Drag queens exaggerate certain characteristics (such as make-up and eyelashes) for comic, dramatic, or satirical effect. Drag queens perform in gay bars. They participate in gay pride parades and drag pageants. They may make appearances at events such as gay rodeos. Drag queens are not female impersonators or transvestites. They generally do not want to pass as women. RuPaul is a drag queen well known through his many television appearances in the 1990s.

All content from Kiddle encyclopedia articles (including the article images and facts) can be freely used under Attribution-ShareAlike license, unless stated otherwise. Cite this article:
Drag queen Facts for Kids. Kiddle Encyclopedia.