2013 Formula One season facts for kids 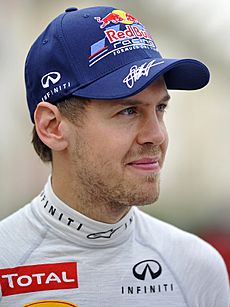 The 2013 Formula One season was the 64th season of the Formula One World Championship. Eleven teams and twenty-two drivers competed in nineteen Grands Prix. The season started in Australia on 17 March and ended in Brazil on 24 November.

Sebastian Vettel was the defending World Drivers' Champion. He was Champion again in 2013.

At the 2012 Malaysian Grand Prix, Bernie Ecclestone said that the "majority" of teams in the 2012 season agreed to compete in 2013. 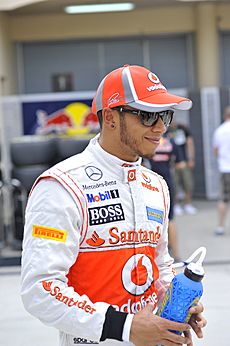 Lewis Hamilton—seen here at the 2012 Bahrain Grand Prix—left McLaren to join the Mercedes works team in 2013.

In September 2012, seven-time World Champion Michael Schumacher said that he was retiring from the sport for a second time. 2008 World Champion Lewis Hamilton agreed to take Schumacher's place. The move ended his fourteen-year career with McLaren.

Driver Sergio Pérez left Sauber to join McLaren. Nico Hülkenberg filled the vacant seat at Sauber. Hülkenberg was joined by Esteban Gutiérrez, who was Sauber's testing and reserve driver in 2011 and 2012.

The following nineteen races appeared on the 2013 race schedule. The number of races on the Formula One calendar is dictated by the Concorde Agreement.

The calendar was originally meant to host twenty races. This would add the new Grand Prix of Jersey. The race in New Jersey was delayed to 2014.

Points are awarded to the top ten classified finishers using the following structure:

All content from Kiddle encyclopedia articles (including the article images and facts) can be freely used under Attribution-ShareAlike license, unless stated otherwise. Cite this article:
2013 Formula One season Facts for Kids. Kiddle Encyclopedia.