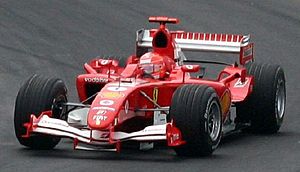 Ferrari have won the most Formula One Grands Prix

Formula One, abbreviated to F1, is a form of open-wheeled auto racing. It is the highest class defined by the Fédération Internationale de l'Automobile (FIA), motorsport's world governing body. The "formula" in the name refers to a set of rules. These rules tell the builders and drivers of the cars what they may and may not do. The F1 world championship season is a series of races. These races are known as Grands Prix. They are usually held on purpose-built circuits. In a few places, they are held on closed city streets. The most famous Grand Prix is the Monaco Grand Prix in Monte Carlo. The top finisher of each race are awarded championship points. The points are added up at the end of they year. There are two yearly Championships. The one for drivers and one for constructors.

All content from Kiddle encyclopedia articles (including the article images and facts) can be freely used under Attribution-ShareAlike license, unless stated otherwise. Cite this article:
List of Formula One Grand Prix winners (constructors) Facts for Kids. Kiddle Encyclopedia.