The Melbourne Grand Prix Circuit is a street circuit around Albert Park Lake, only a couple of kilometres south of central Melbourne. It is used once a year as a racetrack for the Australian Grand Prix and associated support races.

The circuit uses everyday sections of road that circle Albert Park Lake, a small man-made lake just south of the Central Business District of Melbourne. The roads that are used were rebuilt prior to the first race in 1996 to ensure consistency and smoothness. As a result, the Albert Park track has quite a smooth surface.

The course is considered to be quite fast and relatively easy to drive. Drivers have commented that the consistent placement of corners allows them to easily learn the circuit and achieve competitive times. The flat terrain around the lake, coupled with a track design that features few true straights, means that it is not easy to pass another car on the track. Watching the entire race track can only be done from a grandstand seat. 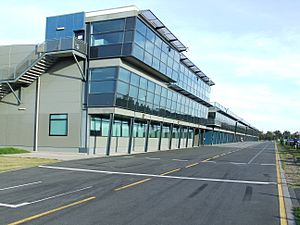 Each year, most of the trackside fencing, pedestrian overpasses, grandstands and other motorsport infrastructure must be erected for the race. This is done about one month before the Grand Prix weekend. They are all removed by six weeks after the event. Land around the circuit has restricted access during the grand prix weekend. This includes an aquatic centre, a golf course, a football stadium, some restaurants and rowing boathouses. Many nearby local residents are unhappy with the loss of park access. Some maintain a silent protest against the event. The event is popular with most people in Melbourne and Australia. They have a large European population and a general interest in motorsport. Middle Park (stadium), the home of South Melbourne FC was demolished in 1994 due to expansion at Albert Park.

Albert Park has the distinction of being the only venue to hold the Australian Grand Prix in both World Championship and non-World Championship formats. Prior to the 1996 Grand Prix, a modified version of the current circuit was used for both the 1953 and 1956 Grands Prix. During this time Albert Park ran anti-clockwise as opposed to the current GP circuit standard clockwise.

All content from Kiddle encyclopedia articles (including the article images and facts) can be freely used under Attribution-ShareAlike license, unless stated otherwise. Cite this article:
Melbourne Grand Prix Circuit Facts for Kids. Kiddle Encyclopedia.