Albert Park and Albert Park Lake are situated in the City of Port Phillip, Victoria, Australia, 3 kilometres (1.9 mi) south of the Melbourne CBD.

Albert Park was originally part of the extensive Yarra River Delta, which involved vast areas of wetlands and sparse vegetation, interspersed by lagoons, some of which were quite large, including the lagoon from which Albert Park Lake was created. The area was occupied by localised tribes of Indigenous Australians, the Wurundjeri people, for around 40,000+ years prior to European settlement, and was one of many sites around Melbourne where regular corroborees (meetings) were held.

Following British settlement from 1835 onwards, much of the Yarra River delta was drained to dry the land and enable agriculture, housing and grazing. Through the 1840s and 1850s, the area now occupied by Albert Park itself was unofficial parkland, used for military training, grazing and hunting. In 1864 the area was officially proclaimed a public park and named Albert Park in honour of Queen Victoria's consort, Prince Albert.

By 1875, areas of the park along Queens Road and in St. Kilda, had been sold off for housing and other uses, reducing the park from 385 to 231 hectares (950 to 570 acres). Through much of the late 19th century, allotments were allocated for sporting facilities such as football, tennis, bowling, cricket and boating. Between 1873 and 1880, silt in the lagoons was excavated and used as infill around the lagoon itself to create a permanent lake. In 1890, water was diverted from the Yarra River to help fill the lake. Through the late 19th and early 20th centuries, the park was used as a tip, a camp for the armed services, scenic drives, picnics and many other forms of recreation. 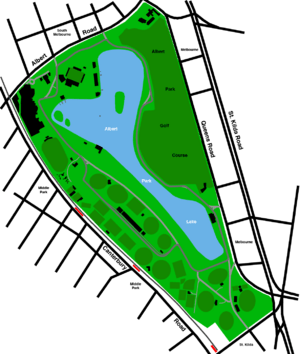 Map of Albert Park and Lake

In 1882, 1918 and 1935, adjoining educational institutions acquired land from the park, to much opposition at the time. From 1941 to 1950, the Army occupied large areas of land in the park, this land was given back to the park during the 1950s and 1960s. From 1953 to 1958, motor racing was held within the park, including the 1953 and 1956 Australian Grands Prix was held within the park, around the lake, until it was moved to the circuit on Phillip Island. Through much of the 1960s, 1970s and 1980s, general park maintenance was neglected as funding became hard to come by, finances were collected from a carousel and similar facilities.

During the early 1990s, the lake was drained to remove weed infestations, rubbish and other debris that had accumulated over the years. In 1993, it was announced that the Australian Grand Prix would be moved from the Adelaide Street Circuit to a reconstructed Albert Park Circuit, loosely following the 1950s configuration. This was met with much opposition, but the project went ahead and a host of sporting facilities were subsequently constructed and funding allocated to improve the parklands followed.

Albert Park is enjoyed by approximately five million visitors annually. Vestiges of Albert Park's Aboriginal history still remain, the most noticeable being the large ancient River Red Gum Tree, reputed to be the site of many corroborees. It is thought to be over 300 years old, the oldest remnant tree in the Port Phillip area, located next to Junction Oval on the corner of Fitzroy Street and Queens Road, St Kilda.

The Clarendon Street gates were originally built of wooden pickets in 1910, they were cast in wrought iron in 1939 and can still be seen today. 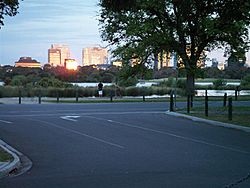 The parkland, Albert Park lake, and Gunn Island, provides a grassy wetlands habitat for nearly two hundred bird species, both resident and transient. A 1990 study recorded 31 bird species as breeding in the park with a total of 21 these indigenous species. Migratory species include the flame robin, white-throated needletail and sacred kingfisher.

Several reptiles and amphibians, such as the marbled gecko make their home in the park.

The lake is home to some freshwater fish species. The department of Primary Industries releases native golden perch for recreational fishing purposes. European carp, a noxious pest are the most commonly found fish in the lake and is subject to control programs.

A vegetation survey in 1992 found 117 species of plants, a mixture of native and exotic species.

A native revegetation area in the south east corner of the park features a large ancient river red gum tree known as the Corroboree Tree, a heritage registered eucalypt of cultural significance as a pre-European gathering place.

There are nine separate picnic areas, most with barbecues, shelters and toilets. There is a vast network of sealed and unsealed, shared pedestrian/bicycle paths, centred on a main route that circles the lake. There are several playgrounds of varying sizes, the park also hosts many large sporting facilities, including:

The Australian Grand Prix is held around the Melbourne Grand Prix Circuit around the lake in March each year; usually on the Labour Day weekend. In 2020 the event was cancelled due to the COVID-19 pandemic.

Every May the RSPCA holds the Million Paws Walk to raise needed income for their work with animals.

Albert Park is home to a 5 km Parkrun event. Albert Melbourne Parkrun starts at 8am every Saturday from the Coot Picnic area.

All content from Kiddle encyclopedia articles (including the article images and facts) can be freely used under Attribution-ShareAlike license, unless stated otherwise. Cite this article:
Albert Park and Lake Facts for Kids. Kiddle Encyclopedia.