The circuit is located on Île Notre-Dame, a man-made island in the St. Lawrence River. It is part of the city of Montreal, was originally named the Île Notre-Dame Circuit. It was renamed in honour of Canadian Formula One driver Gilles Villeneuve, following his death in 1982. Gilles is the father of Jacques Villeneuve. The venue hosted the Champ Car World Series Grand Prix of Montreal from 2002 to 2006. 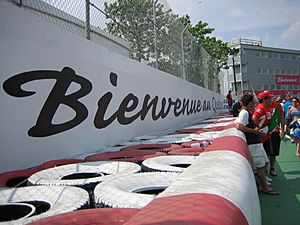 Bienvenue au Québec slogan on the Wall of Champions

Barriers run close to the circuit and many experienced drivers have been caught out by them. A famous part of the circuit is the wall on the outside of the exit of the final chicane. The wall has the slogan Bienvenue au Québec ("Welcome to Quebec") painted on it. It has been giving the nickname "Mur du Québec" (Quebec Wall). In 1999 the wall ended the race of three Formula One World Champions, Damon Hill, Michael Schumacher, and Jacques Villeneuve. FIA GT champion Ricardo Zonta also crashed into the wall. Since then the wall has been nicknamed "The Wall Of Champions". Other drivers who have crashed into the wall include Jenson Button, Fernando Alonso, and Juan Pablo Montoya.

The curbs leading to the final chicane were made higher in 2005. The new curbs were more difficult for the drivers to see, making the chicane even more challenging.

On 23 June 2006, Canadian Press reported that the city of Montreal had awarded Normand Legault the right to stage the race weekends on the track. Legault is the promoter of the Formula One race. The deal run until 2011, with an option to go to 2016. Legault decided to replace the Champ Car race with races from the Grand American Road Racing Association's Rolex Series and NASCAR's Nationwide Series. This would be NASCAR's first race in Canada. On 4 August 2007, Kevin Harvick made history by winning the first Nationwide Series (then Busch Series) race at Circuit Gilles Villeneuve.

The NASCAR races have changed the circuit layout. The pit lanes were expanded. NASCAR pit lane must handle at least 43 cars.

As part of Parc Jean-Drapeau, the Circuit is open to visitors, between races, for walking, running, biking, in-line skating, etc. During the few days of the Grand Prix, Île Notre-Dame is one of the noisiest places in Montreal. At just about any other time of the year, it is one of the quietest, being located in the middle of a river, on an island filled with greenery and animals, joggers and cyclists.

Comparison of different series at the circuit

As the Circuit Gilles Villeneuve serves as host to different racing series, it is possible to directly compare different race series' lap times.

All content from Kiddle encyclopedia articles (including the article images and facts) can be freely used under Attribution-ShareAlike license, unless stated otherwise. Cite this article:
Circuit Gilles Villeneuve Facts for Kids. Kiddle Encyclopedia.