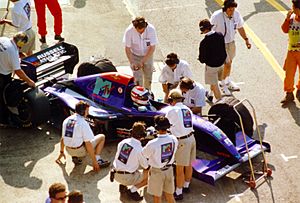 Roland Ratzenberger (4 July 1960 – 30 April 1994) was an Austrian Formula One driver. He was killed in a crash at the San Marino Grand Prix at Imola. He had a short career, and drove for Simtek.

All content from Kiddle encyclopedia articles (including the article images and facts) can be freely used under Attribution-ShareAlike license, unless stated otherwise. Cite this article:
Roland Ratzenberger Facts for Kids. Kiddle Encyclopedia.