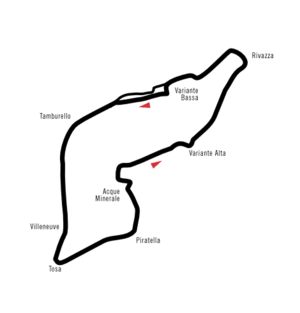 The 1993 San Marino Grand Prix (known as the 13° Gran Premio di San Marino by the people putting on the race) was a Formula One motor race held on 25 April 1993 at the Autodromo Enzo e Dino Ferrari in Imola, Italy. It was the third race of the 1993 Formula One season.

Standings after the race

All content from Kiddle encyclopedia articles (including the article images and facts) can be freely used under Attribution-ShareAlike license, unless stated otherwise. Cite this article:
1993 San Marino Grand Prix Facts for Kids. Kiddle Encyclopedia.