Christian Fittipaldi (born January 18, 1971) is a Brazilian former racing driver who has competed in various forms of motorsport including Formula One, Champ Car, and NASCAR. Named after the less known Brazilian driver Christian Heins (killed at the 1963 24 Hours of Le Mans), he was a highly rated young racing driver in the early-1990s, and participated in 43 Formula One Grands Prix for Minardi and Footwork between 1992 and 1994.

He is the son of former Grand Prix driver and team owner Wilson Fittipaldi, and the nephew of two-time Formula One Champion and Indianapolis 500 winner Emerson Fittipaldi.

Born in São Paulo, Fittipaldi was second in the Brazilian Formula Ford in 1988. After finishing third in the South American Formula 3 in 1989, in 1990 he won the title in the Formula 3 Sudamericana and the fourth place in the British Formula 3.

In 1991, the Brazilian was installed in Europe to compete in the Formula 3000, where he captured two wins and seven podiums in ten races to obtain the championship against Alessandro Zanardi. Later, he was third in the Macau Grand Prix of Formula 3. 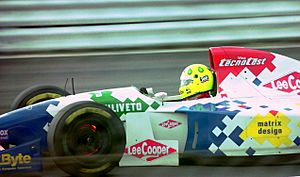 Fittipaldi driving for Footwork at the 1994 British Grand Prix.

His jump into Formula 1 happened in 1992 with Minardi, one of the most modest teams of the grid at the time; he scored a single point in 1992. Christian is the first Formula One driver to be born in the 1970s. Next year, he managed to score a total of five points in the Drivers' Championship, but the team decided to do away with him with two races to go in the season. The following season, he competed in the Footwork team and earned two fourth places, adding to a total of six points in the championship (as those finishes were his only points-paying results that year). At the end of the 1994 season Fittipaldi decided to try his luck in the racing competitions in the United States.

In 2016, in an academic paper that reported a mathematical modeling study that assessed the relative influence of driver and machine, Fittipaldi was ranked the 11th best Formula One driver of all time.

Competing mainly in CART, Fittipaldi was a slow starter, noted for his consistency rather than his outright pace, although by the time he won his first CART event at Road America in 1999, he was a championship contender due to his consistent finishing, among which was a second place in the 1995 Indianapolis 500, which earned him Rookie of the Year honors in the race. However, just as Fittipaldi's American career looked to be taking off, he broke his leg for the first time (out of the two total he suffered while racing in CART) at the Surfer's Paradise race in 1997. Although he was able to return both times and win two races, he never won a CART championship.

With his Champ Car career on hold, Fittipaldi shifted his focus to NASCAR. He made three appearances in the Busch Series during the 2001 and 2002 seasons. Although he was not impressive in those races, he was signed to Petty Enterprises near late-2002 and made his Winston Cup debut at Phoenix after he caught the eye of Richard Petty. In 2003, he made his first (and only) Daytona 500 start in a one-race deal with Andy Petree and then made a handful of appearances for Petty in ARCA. In the summer of that year, Fittipaldi became the driver of the illustrious #43 car after John Andretti (cousin of Christian's former CART teammate Michael Andretti) was let go. He struggled and was reassigned shortly after the start of autumn, but remained with the team, driving the #44 car.

Fittipaldi debuted at the 24 Hours of Daytona in 2003 with the Bell team, resulting sixth with a Doran-Chevrolet of the class Daytona Prototype. It was one of the pilots that won the 2004 24 Hours of Daytona, in this case with a Doran-Pontiac. Then participated in four other rounds from the Grand-Am Rolex Sports Car Series with Bell, earning seventh in Virginia.

The Brazilian contested the first two races of the 2006 Grand-Am series with Bell, earning a sixth place at Homestead. Then ran six rounds with Riley-Pontiac of The Racer's Group, earning a victory in Phoenix, a second place in the 6 Hours of Watkins Glen and third in the 200 Miles at Watkins Glen.

In 2006, Fittipaldi disputed fully the Grand-Am series with the team of Eddie Cheever Jr. Obtained a second place and a sixth, to be located in the 23rd position in the drivers' championship of DP class. That same year, he participated in the 24 Hours of Le Mans with a Saleen S7, where he finished in sixth place in the GT1 class, a total of eleven participants.

Continuing with Cheever, Fittipaldi achieved a fourth, seventh and eighth in 2007 and resulting 20th in the overall table of the DP class of the Grand Am series. Also, it came tenth in the GT1 class of the 24 Hours of Le Mans, at the wheel of an Aston Martin DB9 of team Modena alongside Antonio Garcia and amateur.

Fittipaldi disputed the first four rounds of the 2008 American Le Mans Series with Andretti Green. Piloting an Acura LMP2 with Bryan Herta, earned a fourth place, a fifth, a sixth and a seventh. Then again disputed the 24 Hours of Le Mans with Aston Martin DB9 of Modena, reaching delayed in the 30th overall position. He then ran in the final five rounds of the Grand-Am series with a Coyote-Pontiac of Cheever's team, earning a second place and a sixth.

The driver was invited to run the 2011 24 Hours of Daytona with a Porsche-Riley of Action Express Racing, resulting third overall with Max Papis and João Barbosa among others. In 2012 he participated again in this race with Action Express, in this case at the wheel of a Chevrolet Corvette DP, with which finished fifth.

The Brazilian became in regular driver of Action Express for the 2013 Rolex Sports Car Series season. He achieved two wins at Mid-Ohio and the 6 Hours of Watkins Glen, two seconds places, a fourth and a fifth, mostly with Barbosa. Thus, he was seventh in the drivers' championship in the Daytona Prototypes class.

He won the Rolex 24 at Daytona in 2014 in the Action Express Corvette DP with João Barbosa and Sébastien Bourdais.

All content from Kiddle encyclopedia articles (including the article images and facts) can be freely used under Attribution-ShareAlike license, unless stated otherwise. Cite this article:
Christian Fittipaldi Facts for Kids. Kiddle Encyclopedia.