Maurice A. Ferré Park (formerly Museum Park) is a 30-acre (0.12 km2) public, urban park in downtown Miami, Florida. The park opened in 1976 as Bicentennial Park on the site of several slips served by the Seaboard Air Line Railroad. For some time It was named "Bicentennial Park" to celebrate the bicentennial of the United States in that same year. Today, Museum Park is maintained by the Bayfront Park Management Trust. The park is bordered on the north by I-395, Metromover, and the former Miami Herald headquarters, on the south by the American Airlines Arena and Bayside Marketplace, on the west by Biscayne Boulevard and on the east by Biscayne Bay.

Museum Park is host to many large-scale events as the park can hold around 45,000 people. Some of these events include Ultra Music Festival, a large, three-day music event, numerous rock concerts such as Warped Tour, various conventions, concerts, as well as boat tours around Biscayne Bay. In March 2009, Museum Park was set to host the Langerado Music Festival, a large three-day festival that was held at the Big Cypress Seminole Indian Reservation every Spring since 2003, but was canceled due to poor ticket sales.

Museum Park underwent a renovation for the Pérez Art Museum Miami and construction of the new Phillip and Patricia Frost Museum of Science. The $10 million revamp included a new baywalk and a promenade from Biscayne Boulevard to Biscayne Bay that provides pedestrian access to the museums. as it is currently underutilized for large parts of the year. Pérez Art Museum Miami opened in December 2013 and the Frost Museum of Science opened its doors in May 2017.

The Miami Science Barge is a floating marine laboratory and education platform docked in the park. It was opened in 2016 and focuses on three areas, sustainability, alternative agriculture and marine ecology and conservation. 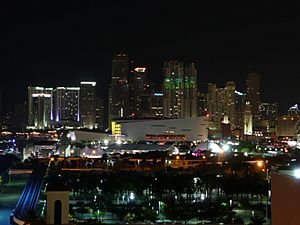 From the early 1900s to the mid-1960s, Bicentennial Park was the location of the Port of Miami, until it eventually moved to neighboring Dodge Island in the mid-1960s. The port at what is today Bicentennial Park was then a bustling cargo, trade and passenger port, with the offices of Clyde Mallory Lines at the park. Once the port moved out to Dodge Island, the land was cleaned up of industrial residue from decades of port trade, and the park was designed, finally opening up in 1976, as Downtown's second large park after Bayfront Park. The name "Bicentennial Park" signifies the bicentenary of the independence of the United States in that same year.

In early 2019 the Park was officially named Maurice A. Ferre Park in dedication to former Miami Mayor Maurice Ferré to pay tribute to him and his legacy.

Racing events were held on a temporary circuit at the park from 1986-1995 involving IMSA, Trans-Am Series, and CART, and again for FIA Formula E in 2015.

All content from Kiddle encyclopedia articles (including the article images and facts) can be freely used under Attribution-ShareAlike license, unless stated otherwise. Cite this article:
Museum Park (Miami) Facts for Kids. Kiddle Encyclopedia.