The Pérez Art Museum Miami (PAMM)—officially known as the Jorge M. Pérez Art Museum of Miami-Dade County—is a contemporary art museum that relocated in 2013 to the Museum Park in Downtown Miami, Florida. Founded in 1984 as the Center for the Fine Arts, it became known as the Miami Art Museum from 1996 until it was renamed in 2013 upon the opening its new building designed by Herzog & de Meuron at 1103 Biscayne Boulevard. PAMM, along with the $275 million Phillip and Patricia Frost Museum of Science and a city park which are being built in the area with completion in 2017, is part of the 20-acre Museum Park (formerly Bicentennial Park). 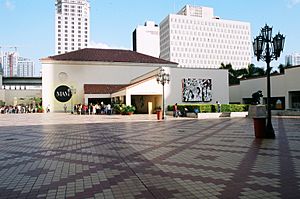 The Center for the Fine Arts opened in the downtown Miami-Dade Cultural Center, a 1983 Spanish-style barn and the first of three buildings to be unveiled in a $24 million county-owned complex designed by Philip Johnson. The museum was built at 101 West Flagler Street in the same Miami Cultural Plaza as HistoryMiami and the Miami-Dade Public Library. The opening's delay of more than a year was occasioned by a $16.5 million renovation of the smoke evacuation system for the complex. Founded as a hall for traveling shows, the $6 million fine arts center did not start acquiring art until 1996. But its efforts were constrained by little storage or exhibition space. The Miami Art Museum was founded in 1996 as a successor to the Center for the Fine Arts.

In November 2010, construction began on the new MAM building in Museum Park in Downtown Miami. The building is designed by Swiss architects Herzog and de Meuron, who were hired by Terence Riley, director of the museum in 2009, when plans were made. The structure is meant to resemble Stiltsville, which is the name given to a group of wooden houses built on stilts that stand off the coast of Key Biscayne in Biscayne Bay. The new museum building was built alongside the new Miami Science Museum building at the redesigned park. The three-story building has 200,000 square feet (19,000 m2), composed of 120,000 interior square footage, and 80,000 exterior square footage. Inside the museum, display spaces can be illuminated by floor-to-ceiling windows, which can also be blocked off or used as backdrop. Otherwise the rooms get clinically even light delivered by strips of fluorescent tubes, though spotlights can also be used. A grand staircase — nearly the entire 180-foot width of the platform — connects it to the waterfront. Thick, sound-absorbing curtains cordon off one large or two small areas of the stair for programs.

With their raised, wraparound terraces and broad overhanging canopies, the houses are conceived to withstand hurricanes and floods, while providing ample shade and ventilation. The museum also incorporates a series of hanging vertical gardens made from local plants and vegetation, designed by French botanist Patrick Blanc. Blanc experimented with different kinds of species throughout the years and the gardens now comprise 80 kinds of plants which are supposed to survive subtropical heat as well as hurricanes. According to Christine Binswanger, the project architect, the plants provide a transition for visitors entering from the outdoors. The new PAMM building opened in December 2013, and the Miami Science Museum building opened in May 2017.

To build the new $131-million museum building, the MAM entered into a public-private partnership with the City of Miami and Miami-Dade County. The location on Biscayne Bay was provided by the City of Miami. The museum cost $220 million to build, with $100 million coming from Miami-Dade voters in general obligation bond funding, and $120 million from private donors. As of mid-2011, private donors had committed more than $50 million in additional support for the building and institutional endowment. Jorge M. Pérez, longtime trustee and collector of Latin American art, made a gift of $35 million, to be paid in full over ten years, to support the campaign for the new museum, which was in turn renamed the Jorge M. Pérez Art Museum of Miami-Dade County. The new MAM location is intended to transform Museum Park into a central destination on Miami's cultural map, promote progressive arts education, build community cohesiveness, and contribute substantially to downtown revitalization.

Herzog & de Meuron's design for the new building has drawn critical acclaim. For example, the Wall Street Journal stressed that their design could be instrumental in making the museum a destination and the New York Times called the design "spectacular" The Washington Post went as far as to say that "the new setting is as much a part of the gallery as the collection". 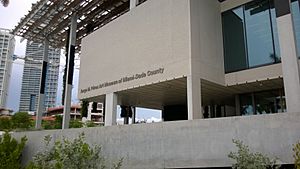 The Pérez Art Museum has been collecting art since 1996. The focus of the museum is 20th century and contemporary art, as well as cultures of the Atlantic Rim, which it defines as the Americas, Western Europe and Africa. At the time of the new building's opening, the museum's holdings included 1,800 objects, nearly 500 of which were acquired in 2013, including pieces by John Baldessari, Olafur Eliasson and Dan Flavin. In its permanent collections, there are second half of the twentieth century and Contemporary works by Purvis Young, Joseph Cornell, Kehinde Wiley, James Rosenquist, Frank Stella, and Kiki Smith. Much of the museum’s current collection has been donated, with 110 works coming from Jorge M. Pérez, among them pieces by the Cuban painters José Bedia Valdés and Wifredo Lam, as well as the Mexican artists Diego Rivera and Damian Ortega, the Uruguayan Joaquín Torres-García and the Colombian Beatriz González. Pérez donated over 170 works until 2017.

In 2013, museum trustee and Miami developer Craig Robins pledged 102 paintings, photographs, sculptures and other works from his personal collection.

In 2012, Pérez pledged $500,000 to establish an acquisitions fund for African-American art, matched shortly after by the Miami-based John S. and James L. Knight Foundation. In 2014, the museum launched the Ambassador of African American Art programme, its first-ever affiliate group, which invites donors to contribute directly to the fund.

In 2016, Pérez made a second significant donation of art and an additional pledge of $10 million to be paid over the following 10 years. The museum was required to use the first $5 million of this donation to acquire contemporary Cuban art. The second $5 million went to the museum’s endowment, and Pérez said he wanted the donation to entice other wealthy patrons to give to the museum. The art included more than 200 pieces (appraised at $5 million) from Pérez’s personal collection of contemporary Cuban art, including pieces by Glexis Novoa, Rubén Torres Llorca, Hernan Bas and José Bedia. As a result, the PAMM now has one of the largest collections of contemporary Cuban art in America.

In 2019, sixteen works by the artists Christo and Jeanne-Claude worth around $3 million were donated to Pérez Art Museum Miami by its trustee Maria Bechily and her husband Scott Hodes.

In February 2014, a local Floridian artist, Máximo Caminero, destroyed a coloured vase by the Chinese artist Ai Weiwei in protest at Pérez Art Museum Miami's lack of displays by local artists. The value of the vase was estimated at $1 million. Caminero was subsequently arrested and charged with criminal mischief. Pérez Art Museum Miami released this statement on February 17, 2014 in response to the incident: "We have the highest respect for freedom of expression, but this destructive act of vandalism is disrespectful to another artist and his work, to Pérez Art Museum Miami, and to our community." In March 2014, Caminero’s lawyer, John de León, entered a not-guilty plea. Caminero subsequently pleaded guilty to one charge of criminal mischief and was sentenced to 18 months of probation and 100 hours of community service. He was banned from visiting the museum during the period of his probation.

After the opening of the new museum building, the museum has seen over 150,000 visitors in its first four months and 300,000 visitors in its first 12 months. According to The Art Newspaper’s annual survey of museum attendance, the "old" Miami Art Museum (PAMM's predecessor) attracted 54,295 visitors in 2012 — a weak showing in a metropolitan area with a population of five million people. Aaron Podhurst serves as Chairman of the museum´s board and Gregory C. Ferrero has been serving as president since 2017.

As the Miami Art Museum, the museum had an annual operating budget of $6 million. After the inauguration of the new building and the museum's renaming, the budget increased to $16 million per annum, with a rapid increase of staff and curators. In 2013-14, Miami-Dade County provided $2.5 million of this (up from $1.9 million the previous year).

In 2019, the Pérez Art Museum Miami was a $1 million gift from the Andrew W. Mellon Foundation in support of the institution’s newly formed Caribbean Cultural Institute, which is intended to promote the research and exhibition of work by artists from the Caribbean and its diaspora.

In the summer of 2017, PAMM participated for the second time in the Knight Foundation-funded program Inside/Out. During the three-month project, PAMM displayed replicas of its artworks throughout the neighborhoods of Miami-Dade. The project is funded from $150,000 per year from the Knight fund.

All content from Kiddle encyclopedia articles (including the article images and facts) can be freely used under Attribution-ShareAlike license, unless stated otherwise. Cite this article:
Pérez Art Museum Miami Facts for Kids. Kiddle Encyclopedia.