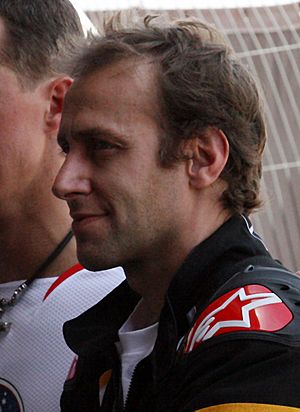 Luca Badoer (born 25 January 1971) is an Italian Formula One driver. He was born in Montebelluna. He has raced for the Scuderia Italia, Minardi, Forti Corse and most recently, Ferrari teams. In addition to his racing duties, Badoer has been active as one of the test and reserve drivers for Ferrari since 1997 and in 2009 stood in for Ferrari's regular race driver Felipe Massa at the European Grand Prix and the Belgian Grand Prix, after the Brazilian was injured during qualifying for the Hungarian Grand Prix and his original replacement, Michael Schumacher, pulled out due to injury.

All content from Kiddle encyclopedia articles (including the article images and facts) can be freely used under Attribution-ShareAlike license, unless stated otherwise. Cite this article:
Luca Badoer Facts for Kids. Kiddle Encyclopedia.