Clark was a versatile driver who competed in sports cars, touring cars and in the Indianapolis 500, which he won in 1965. He was particularly associated with the Lotus marque.

Clark was killed in a Formula Two racing accident in 1968 in Hockenheim, West Germany. At the time of his death at age 32, he had won more Grand Prix races (25) and achieved more Grand Prix pole positions (33) than any other driver. In 2009, The Times placed Clark at the top of a list of the greatest-ever Formula One drivers.

Clark was an inaugural inductee into the Scottish Sports Hall of Fame in 2002. 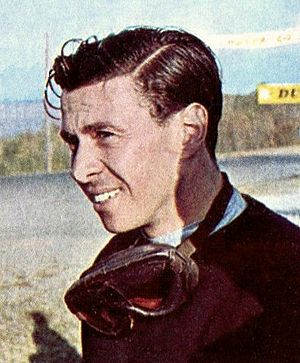 James Clark Jr was born into a farming family at Kilmany House Farm, Fife, the youngest child of five, and the only boy. In 1942 the family moved to Edington Mains Farm, near Duns, Berwickshire, in the Borders. He was educated at primary schools, first in Kilmany and then in Chirnside, and then following three years of preparatory schooling at Clifton Hall School near Edinburgh he was sent to Loretto School in Musselburgh, near Edinburgh.

Although his parents were opposed to the idea, Clark started his racing in local road rally and hill climb events driving his own Sunbeam-Talbot, and proved a fearsome competitor right from the start. On 16 June 1956, in his very first event, he was behind the wheel of a DKW sonderklasse at Crimond, Scotland. By 1958, Clark was driving for the local Border Reivers team, racing Jaguar D-types and Porsches in national events, and winning 18 races.

All content from Kiddle encyclopedia articles (including the article images and facts) can be freely used under Attribution-ShareAlike license, unless stated otherwise. Cite this article:
Jim Clark Facts for Kids. Kiddle Encyclopedia.