Jaguar is the luxury vehicle brand of Jaguar Land Rover, a British multinational car manufacturer with its headquarters in Whitley, Coventry, England and owned by the Indian company Tata Motors since 2008. Jaguar Cars was the company that was responsible for the production of Jaguar cars until its operations were fully merged with those of Land Rover to form Jaguar Land Rover on 1 January 2013.

Jaguar's business was founded as the Swallow Sidecar Company in 1922, by two motorcycle enthusiasts, William Lyons and William Walmsley, originally making motorcycle sidecars before developing bodies for passenger cars. Under the ownership of S. S. Cars Limited the business extended to complete cars made in association with Standard Motor Co, many bearing Jaguar as a model name.

Jaguar has, in recent years, manufactured cars for the British Prime Minister, the most recent delivery being an XJ in May 2010. The company also holds royal warrants from Queen Elizabeth II and Prince Charles. 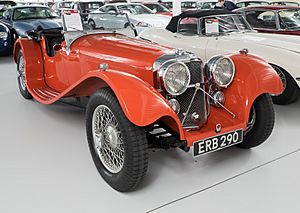 Since the Ford ownership era, Jaguar and Land Rover have used joint design facilities in engineering centres at Whitley in Coventry and Gaydon in Warwickshire and Jaguar cars have been assembled in plants at Castle Bromwich and Solihull.

Jaguar first appeared in September 1935, the company made its name by producing a series of successful eye-catching sports cars, its slogan being for years was "Grace, Space, Pace".

Jaguar made its name by producing a series of successful eye-catching sports cars, all "value for money". The sports cars were successful in international motor-sport, a path followed in the 1950s to prove the engineering integrity of the company's products.

Two of the proudest moments in Jaguar's long history in motor sport involved winning the Le Mans 24 hours race, firstly in 1951 and again in 1953. Later in the hands of the Scottish racing team two more wins were added in 1956 and 1957. 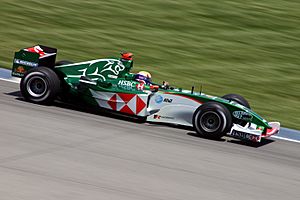 In spite of such a performance orientation, it was always the intention to build the business by producing world-class sporting saloons. Jaguar secured financial stability and a reputation for excellence with a series of elegantly styled luxury saloons. All were deemed very good value, with comfortable rides, good handling, high performance, and great style.

Combined with a trend-setting series of sports cars, Jaguar's reputation as a prestige motorcar manufacturer had few rivals. The company's post-War achievements are remarkable, considering both the shortages that drove Britain (the Ministry of Supply still allocated raw materials) and the state of metallurgical development of the era.

Few engine types have demonstrated such vastness and longevity: Jaguar used the Twin OHC XK Engine, as it came to be known, in the Jaguar XJ6 saloon from 1969 through 1992, and employed in a J60 variant in such diverse vehicles as the British Army's Combat Vehicle Reconnaissance (Tracked) family of vehicles, as well as the Fox armoured reconnaissance vehicle, the Ferret Scout Car, and the Stonefield four-wheel-drive all-terrain lorry. Properly maintained, the standard production XK Engine would achieve 200,000 miles of useful life.

All content from Kiddle encyclopedia articles (including the article images and facts) can be freely used under Attribution-ShareAlike license, unless stated otherwise. Cite this article:
Jaguar Cars Facts for Kids. Kiddle Encyclopedia.