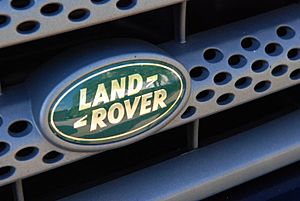 Land Rover is a brand of the British Jaguar Land Rover company. The company makes cars (SUV's). Since 2008 they have been owned by a Indian company called Tata Motors. Land Rover supplies the British Army with vehicles. The original Land Rover car dates back to 1948, and was designed by Maurice Wilks.

All content from Kiddle encyclopedia articles (including the article images and facts) can be freely used under Attribution-ShareAlike license, unless stated otherwise. Cite this article:
Land Rover Facts for Kids. Kiddle Encyclopedia.