Solihull is one of the most affluent areas outside of London. In November 2013, the uSwitch Quality of Life Index named Solihull the "best place to live" in the United Kingdom. Residents of Solihull and those born in the town are referred to as Silhillians. The motto of Solihull is Urbs in Rure (Town in Country).

Solihull's name is commonly thought to have derived from the position of its parish church, St Alphege, on a 'soily' hill. The church was built on a hill of stiff red marl, which turned to sticky mud in wet weather.

The town is noted for its historic architecture, which includes surviving examples of timber framed Tudor style houses and shops. The historic Solihull School dates from 1560 (although not on its present site). The red sandstone parish church of St. Alphege dates from a similar period and is a large and handsome example of English Gothic church architecture, with a traditional spire 168 feet (51 metres) high, making it visible from a great distance. It is located at the head of High Street and is a Grade I listed building. It was founded in about 1220 by Hugh de Oddingsell. A chantry chapel was also founded there by Sir William de Oddingsell in 1277 and the upper chapel in St Alphege was built for a chantry. 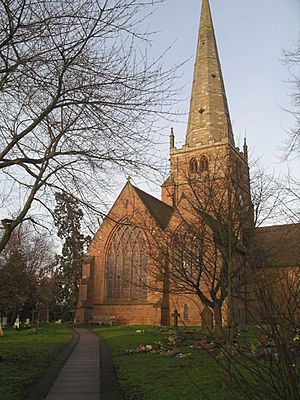 Unlike nearby Birmingham, the Industrial Revolution largely passed Solihull by and until the 20th century Solihull remained a small market town. World War II also nearly passed Solihull by. Neighbouring Coventry and Birmingham were severely damaged by repeated German bombing raids but apart from some attacks on what is now the Land Rover plant, the airport and the local railway lines, Solihull escaped largely intact.

In 1901, the population of the town was just 7,500. This growth was due to a number of factors including a large slum clearance programme in Birmingham, the development of the Rover car plant, the expansion of what was then Elmdon Airport into Birmingham International Airport and, perhaps most significantly, the release of large tracts of land for housing development attracting inward migration of new residents from across the UK. 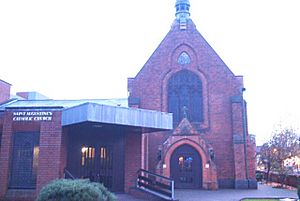 Until the early 1960s, the main high street remained much as it would have been in the late 19th century with several streets of Victorian terraced houses linking High Street with Warwick Road. The construction of the central shopping area known as Mell Square (named after W. Maurice Mell, the town clerk who planned the work) involved the demolition of properties in Mill Lane and Drury Lane, some of which were several hundred years old, together with that of the large Victorian Congregational Church that had stood on the corner of Union Street and Warwick Road. On the right along High Street from St Alphege's Church porch is one of the town's oldest landmarks, the George, which dates from the 16th century. It is now called the Ramada Jarvis Hotel.

Arden Golf Club, Solihull, (now defunct) was founded in 1891. The course was still appearing on maps into the 1930s. 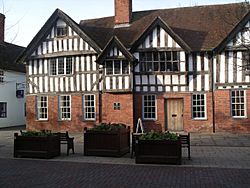 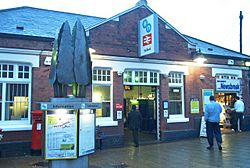 Solihull railway station is on the former Great Western Railway line from Birmingham Snow Hill station to London Paddington although trains now run along the Chiltern Main Line terminating at London Marylebone. Solihull railway station was first built on a very grand scale, with 2 island platforms complete with nearly full length canopies, and a large goods yard, boasting space for some 200+ waggons; the yard was equipped with a loading dock, goods shed and large crane. Solihull was also rare in being only one of a handful of stations in the area to have a goods relief line.

Other railway links are provided on the West Coast Main Line, as Birmingham International railway station lies within the borough's boundaries and offers frequent express connections to London. Express train services through Solihull are now run by Chiltern Railways and local services by London Midland.

The Grand Union Canal passes across Solihull, coming within 1 mi (1.6 km) of the town centre and linking the town to the River Thames in London. 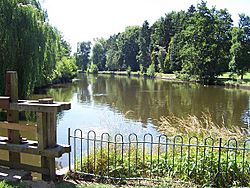 Solihull has a number of parks and local nature reserves, including for:

Other parks include Tudor Grange Park, Elmdon Park, Hillfield Park, Cole Bank Park, Knowle Park and Shirley Park. The nearest parks to the town centre are Malvern and Brueton Parks. They are interlinked and cover a total area of about 130 acres (0.53 km2). Brueton Park used to be part of the grounds of Malvern Hall, which dates back to about 1690. It is home now to St Martin's Independent School for Girls.

The River Blythe, a headwater tributary of the River Trent, passes through parts of Solihull including Malvern and Tudor Grange Parks.

The borough is well served by numerous youth groups, both from the statutory and voluntary sector. There are several Scout groups including Knowle Sea Scout Group which is based in the south of Solihull and is sponsored by the Royal Navy providing a wide programme of activities for young people from all over Solihull aged from 6 to 18. The recently refurbished ice rink on Hobs Moat Road is home to Solihull's ice hockey teams, the Solihull Barons, Solihull Vikings, a junior ice hockey team, the Mohawks ice racing club, as well as ice dance and figure skating clubs. Above the ice rink is a Riley's snooker club.

Every year since the early 1930s (apart from gaps during world wars), Solihull Carnival has taken place. This is now fixed to the first weekend after the June half-term and takes place in Tudor Grange Park, organised by Shirley Round Table. The event raises about £10,000 for charitable causes each year.

Tudor Grange Park is also the venue for the annual free firework display held on the Saturday closest to 5 November, organised by Solihull Round Table. The event attracts about 15,000 people to the park.

Solihull is twinned with:

All content from Kiddle encyclopedia articles (including the article images and facts) can be freely used under Attribution-ShareAlike license, unless stated otherwise. Cite this article:
Solihull Facts for Kids. Kiddle Encyclopedia.