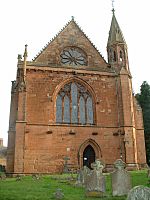 Temple Balsall is a small hamlet within the Metropolitan Borough of Solihull in the English West Midlands, situated between the large villages of Knowle (where population details as taken at the 2011 census can be found) and Balsall Common. It was formerly in Warwickshire and is on a notoriously bad bend on the B4101 Kenilworth Road.

It is one of the oldest and most interesting sites in the borough. It is named after, and dates from the time of, the Knights Templar. They farmed about 650 acres (2.6 km2) of the estate in the 12th century, and established Balsall Preceptory where a number of brothers lived and ran the estate. After the Order was suppressed, the estate was given to the Knights Hospitaller of St John. They lost it when Henry VIII dissolved the monasteries and Queen Elizabeth I gave the estate to Robert Dudley. The 13th-century church and Old Hall, and 17th-century almshouses survive.

All content from Kiddle encyclopedia articles (including the article images and facts) can be freely used under Attribution-ShareAlike license, unless stated otherwise. Cite this article:
Temple Balsall Facts for Kids. Kiddle Encyclopedia.