Arden is an area located mainly in Warwickshire, England, with parts in Staffordshire and Worcestershire, and is traditionally regarded as extending from the River Avon to the River Tame. It was once heavily wooded, giving rise to the name 'Forest of Arden'.

Believed to be derived from a Brythonic word ardu- "high" (cf. Welsh ardd), by extension "highland", the area was formerly thickly forested and known as the Forest of Arden. Located near the geographical centre of England, the Forest of Arden, through which no Roman roads were built, was bounded by the Roman roads Icknield Street, Watling Street, Fosse Way, and a prehistoric salt track leading from Droitwich. It encompassed an area corresponding to the north-western half of the traditional county of Warwick, stretching from Stratford-on-Avon in the south to Tamworth (in Staffordshire) in the north, and included what are now the large cities of Birmingham and Coventry, in addition to areas that are still largely rural with numerous areas of woodland. The most important and largest settlement in the forest was the town Henley-in-Arden (in a valley of the River Alne, approximately 15 miles southeast of Birmingham), the site of an Iron Age hillfort. 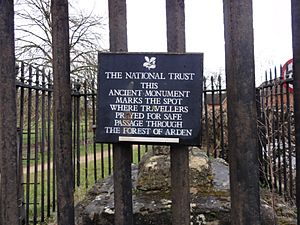 The wayside cross was said to be the place travellers would pray at before entering The Ancient Forest of Arden, now just a collection of small woods. 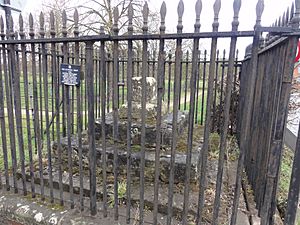 The wayside cross was said to be the place travellers would pray at before entering The Ancient Forest of Arden, now just a collection of small woods.

An ancient mark stone known as "Coughton Cross" is still present at the south western corner of the forest, at the junction of Icknield Street (now A435) and the salt track. It is located at the southern end of the frontage of Coughton Court and is owned by the National Trust. According to local tradition, travellers prayed here for safe passage through the forest.

From around 1162, until the suppression of the order in 1312, the Knights Templar owned a preceptory at Temple Balsall in the middle of the Forest of Arden. The property then passed to the Knights Hospitaller, who held it until the Reformation during the 16th century.

Robert Catesby, leader of the Gunpowder Plot of 1605, was a native of Lapworth, a village in Arden. It is believed that many local families had resisted the Reformation and retained Catholic sympathies, possibly including the family of Shakespeare, whose paternal ancestors were from Temple Balsall.

Thorkell of Arden, a descendant of the ruling family of Mercia, was one of the few major English landowners who retained extensive properties after the Norman conquest, and his progeny, the Arden family, remained prominent in the area for centuries. Mary Arden, mother of William Shakespeare, was a member. 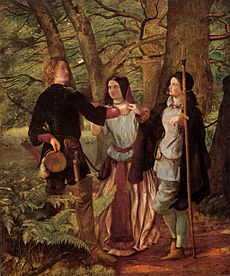 The Mock Marriage of Orlando and Rosalind from William Shakespeare's As You Like It, by Walter Howell Deverell

Shakespeare's play As You Like It is set in the Forest of Arden, however it is an imaginary version incorporating elements from the Ardennes forest in Thomas Lodge's prose romance Rosalynde and the real forest (both as it was then, subjected to deforestation and enclosure, and the romanticized version of his youth).

Towns in the area include Hampton-in-Arden, Henley-in-Arden, and Tanworth-in-Arden.

Proposal for a new national forest

The Countryside Commission considered creating a new national forest in the area in 1989, but the proposal was not taken up. A national forest has been established in the northern midlands however.

Publisher Felix Dennis planted substantial areas of woodland in the area, known as the Heart of England Forest and on his death in 2014 left most of his fortune to be used for this purpose. 3000 acres have been planted in Spernall, Dorsington and Honeybourne.

All content from Kiddle encyclopedia articles (including the article images and facts) can be freely used under Attribution-ShareAlike license, unless stated otherwise. Cite this article:
Arden, Warwickshire Facts for Kids. Kiddle Encyclopedia.