Henley-in-Arden (also known as simply Henley) is a small town in Warwickshire, England. The name is a reference to the former Forest of Arden. In the 2001 census the town had a population of 2,011, increasing to 2,074 at the 2011 census.

Henley is known for its variety of historic buildings, some of which date back to medieval times and wide variety of preserved architectural styles. The one mile long (1.6 km) High Street of Henley is a conservation area.

Henley-in-Arden is approximately 9 miles west of the county town of Warwick, 15 miles southeast of Birmingham, 9 miles east of Redditch and 9 miles north of Stratford upon Avon (where the road between Stratford and Henley was named Henley Street).

It is located in a valley of the River Alne, which separates Henley from the adjacent settlement of Beaudesert. Henley and Beaudesert effectively form a single entity, and share a joint parish council, although Beaudesert is a separate civil parish.

The town lies at a crossroads between the A3400 and the A4189 roads and is the starting point for the circular Arden Way path. It also lies on the Heart of England Way. Henley Sidings is a nature reserve managed by the Warwickshire Wildlife Trust.

Henley-in-Arden is not listed in the Domesday Book and may not have existed until the 12th century. The first record of the town is in a legal instrument drawn during the reign of Henry II. It was originally a hamlet of Wootton Wawen, on Feldon Street, the original route out of the Forest of Arden.

In the 11th century, a Thurstan de Montfort constructed Beaudesert Castle, a motte and bailey castle, on the hill above Beaudesert. In 1140, the Empress Matilda granted the right to hold a market at the castle and Henley soon became a prosperous market town, conveniently located on the busy Birmingham-to-Stratford road. In 1220 in the reign of Henry III, the lord of the manor, Peter de Montfort, procured the grant of a weekly Monday market and an annual fair to last two days, for the town.

The initial prosperity came to an end however during the Second Barons' War when, in 1265, Peter de Montfort died fighting at the Battle of Evesham. The royalist forces won, and the town and castle were burnt in reprisal. The town and castle recovered however and Henley became a borough in 1296. In 1315 all of the recorded townsfolk were freemen. The King stayed at the castle for 7 days in January 1324. By 1336 the market was so prosperous that the inhabitants were able to obtain a licence from Edward III to impose a local sales tax on all goods brought to the market, for a period of three years, in order to pay for the cost of paving the streets. The Lord of the Manor, Peter de Montfort 3rd Baron Montfort, as Commissioner of Array for Warwickshire sent 160 archers to the Battle of Crecy during the Hundred Years' War in 1346. By the 15th century, the lords of the manor were the Boteler family. Ralph Boteler, 1st Baron Sudeley obtained a charter from Henry VI in 1449, confirming the grant of the new weekly market, and a grant for two annual fairs. 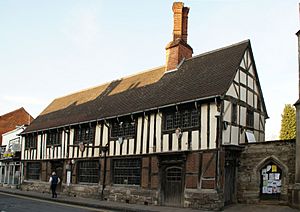 The Guild Hall of Henley-in-Arden

The town suffered another misfortune during the English Civil War, when in 1643 Prince Rupert who was in charge of the Royalist forces, marched his soldiers through the town in 1643 on his way to Birmingham and pillaged the neighbourhood.

As a non-chartered market town, Henley's administration was based upon a manorial court. Under the lord of the manor were a high bailiff, a low bailiff, a third-borough, a constable, and pairs of ale-tasters, Chamberlains, leathersealers, brook lookers, fieldreeves, and affearors. These local borough officials were chosen annually by a meeting of former bailiffs and constables, and were members of the jury of the biannual court leet. The bailiff, accompanied by his predecessors, would formally open the annual town fair. The town hall was inherited from a medieval Guild. The records of the court leet and the court baron in Henley date from 1592 onwards. The court rolls are largely concerned with (in Dyer's words) modest problems, such as preventing the poor from migrating into the town (which burgers considered would become a burden on the rates and result in the destruction of hedges for fuel), the ringing of loose pigs, and the prevention of horses being parked in the streets. The poor were a significant problem for Henley's court leet. In the early 17th century there was a marked increase in the landless poor, squatting on commons and on wasteland in the Forest of Arden, and such people were generally regarded as violent and criminal by townsfolk. Between 1590 and 1620 there were a disproportionate number of people, relative to the size of the population, presented by the court leet for engaging in violent affray, something which Underdown states to be "surely no coincidence". In Love's Labours Lost Rosaline says "Better wits have worn plain Statute Caps.". This is believed to be a reference to events in Henley during the writing of that play, before its publication, when the denizens of Henley were prosecuted in the court leet for being in breach of a statute (enacted with the aim of ensuring economic support for the wool industry) that required the wearing of woollen caps on Sundays and other holy days.

By 1814, Henley had a weekly market every Monday, three annual fairs (on Lady Day; on Tuesday in Whitsunday-week, for cattle; and on 29 October for horses, cattle, sheep, and hops), and a population in 1811 (according to returns made to Parliament) of 1,055 (with 242 inhabited houses and 12 uninhabited houses).

Although the castle no longer remains, several other historical buildings and structures still exist in the town, such as the parish churches of St. Nicholas and St. John the Baptist, the 15th century Guildhall (which has been restored), the medieval market cross (much of the decoration of whose shaft has been mutilated but which has three ranges of kneeling places and sculptures representing the Holy Trinity, the cruxifiction of Jesus, and, it is believed, St Peter), the 16th century White Swan, and several half timbered residences along High Street, the main street of the town.

Historically, Henley has had several private lunatic asylums. The first was licensed in 1744, which housed pauper lunatics at the expense of the parish. Another was run by Thomas Burman in 1795, who charged "one guinea/week for board and medicines, the patient finding their own linen and washing. If any person chuses a servant constantly to attend on them, board and wages are separately considered.".

The town lies a few miles southwest of the M40 motorway, which links Birmingham and London.

Bus service X20 running from Birmingham to Stratford-upon-Avon runs through the town along the High Street, this service is operated by local Henley-in-Arden based bus and coach company Johnsons Coach and Bus under contract to Warwickshire County Council operating up to every 60 minutes.

All content from Kiddle encyclopedia articles (including the article images and facts) can be freely used under Attribution-ShareAlike license, unless stated otherwise. Cite this article:
Henley-in-Arden Facts for Kids. Kiddle Encyclopedia.