Warwick ( WORR-ik) is the county town of Warwickshire, England. The town lies upon the River Avon, 11 miles (18 km) south of Coventry and just west of Leamington Spa and Whitnash with which it is conjoined. At the 2011 United Kingdom census, it had a population of 31,345.

There was human activity at Warwick as early as the Neolithic period, and constant habitation since the 6th century. It was a Saxon burh in the 9th century; Warwick Castle was established in 1068 as part of the Norman conquest of England. Warwick School claims to be the oldest boys' school in the country. The earldom of Warwick was created in 1088 and the earls controlled the town in the medieval period and built town walls, of which Eastgate and Westgate survive. The castle developed into a stone fortress and then a country house and is today a popular tourist attraction.

The Great Fire of Warwick in 1694 destroyed much of the medieval town and as a result most buildings post-date this period. Though Warwick did not become industrialised in the 19th century, it has experienced growth since 1801 when the population was 5,592. Racing Club Warwick F.C., founded in 1919, is based in the town. The town is administered by Warwick District Council and Warwickshire County Council has its headquarters in Warwick. 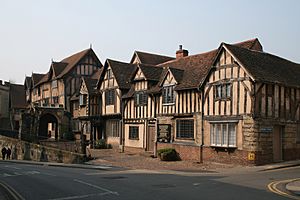 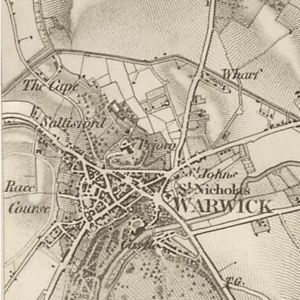 An Ordnance Survey map published in 1834 showing Warwick; the castle is at the south of the settlement next to the River Avon.

Human activity on the site of the town dates back to the Neolithic, when a settlement may have been established. From the 6th century onwards, Warwick has been continuously inhabited. According to the Anglo-Saxon Chronicle, in the year 914 the Anglo-Saxon Ethelfleda Lady of the Mercians, daughter of king Alfred the Great and sister of king Edward the Elder of Wessex, built a burh or fortified dwelling at Warwick. It was one of ten burhs built to defend the kingdom of Mercia against the Danes. Warwick was chosen as the site for one of these fortifications because of its proximity to the important transport routes of the Fosse Way and the Avon. In the early 10th century a new shire was founded with Warwick as its administrative centre, giving the settlement new importance. The name 'Warwick' means "dwellings by the weir". In 1050 the Danes invaded Mercia and burned down much of Warwick including the nunnery (which stood on the site of the present day St Nicholas Church).

William the Conqueror founded Warwick Castle in 1068 on his way to Yorkshire to deal with rebellion in the north. Building a castle within a pre-existing settlement could require demolishing properties on the site, and in the case of Warwick four houses were pulled down. The castle was within the larger Anglo-Saxon burh and a new town wall was created close to the rampart of the burh.

In the medieval period Warwick remained under the control of various Earls of Warwick, mostly of the Beauchamp family, becoming a walled town. Today the only remains of the town walls are the east and west gatehouses. The eastern gatehouse is now a holiday home, but formerly served as part of the King's High School, a sister institution to Warwick School. Warwick was not incorporated as a borough until 1545. The town's Priory was founded in 1142 on the site of the current Priory Park. 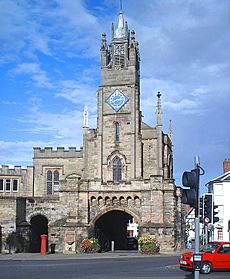 During the English Civil War the town and castle were garrisoned for Parliament. The garrison, under Sir Edward Peyto, withstood a two-week siege by the Royalists. Later musters from 1644 to 1646 record a garrison of up to 350 men under the command of Colonel William Purefoy and Major John Bridges. The middle of the 17th century also saw the founding of Castle Hill Baptist Church, one of the oldest Baptist churches in the world.

Much of the medieval town was destroyed in the Great Fire of Warwick which occurred in 1694. As a result, most of the buildings in the town centre are of late 17th- and early 18th-century origin, although a number of older medieval timber framed buildings survive, especially around the edges of the town centre.

The fire burnt down much of the medieval church of St Mary; both the chancel and the Beauchamp Chapel, however, survived, the latter having been built between 1443 and 1464 according to the wishes of Richard Beauchamp, Earl of Warwick (who had died in Rouen in 1439). A full size reclining copper gilt effigy of the Earl lies upon his Purbeck marble tomb – a fine piece of medieval metalwork cast in 1459.

Antiquarian William Dugdale wrote in the 17th century that Warwick was "standing upon a rocky ascent from every side, and in a dry and fertile soil, having ... rich and pleasant meadows on the south part ... and ... woodland on the north". Two factors have affected Warwick's built environment: the Great Fire of 1694 and the lack of industrialisation. The fire destroyed much of the town, and the subsequent rebuilding was largely in one style. In the 19th century, when other towns were rapidly growing during the Industrial Revolution, Warwick did not experience the same growth. As a result, the factories and workers' housing largely passed Warwick by. Part of the reason Warwick did not develop as a centre of industry was that the town did not lie on important roads and the River Avon was not navigable as far as Warwick. 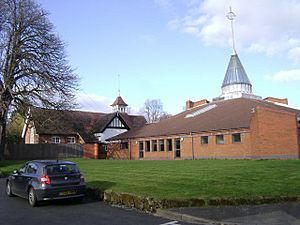 Warwick Gates is a housing estate and business park in Heathcote, south-west Warwick which was built in the late 1990s. Although separated from Warwick town centre by open fields, Warwick Gates falls within the Warwick South and Bishops Tachbrook parish. It is adjacent to Whitnash, a small town near Leamington Spa, and nearby the village of Bishops Tachbrook. The Tachbrook Park and Heathcote industrial estates are located nearby. The NHS Royal Leamington Spa Rehabilitation Hospital is adjacent to Warwick Gates.

In the early 2010s another new estate was built to the south-west of the town, adjacent to Warwick Racecourse. This was called Chase Meadow and contains, amongst other things, a public house, a chinese takeaway and a fish and chip shop.

Warwick, along with the rest of the British Isles, experiences a maritime climate, characterised by a narrow temperature range, mild winters and cool summers. The nearest official met office weather station is Wellesbourne, located about 6 miles south of Warwick town centre, and at a similar elevation.

At the 2001 UK census, Warwick had a population of 23,350. The population density was 8,841 per square mile (3,414/km2), with a 100 to 95.7 female-to-male ratio. Of those over 16 years old, 29.0% were single (never married), 43.4% married, and 8.9% divorced. Warwick's 10,285 households included 33.1% one-person, 36.7% married couples living together, 8.6% were co-habiting couples, and 16.8% single parents with their children; these figures were similar to those of the wider district of Warwick, however both borough and town had higher rates of single parents than England (9.5%). Of those aged 16–74, 26.2% had no academic qualifications, above the figure for the district but below proportion nationally (22.2% and 28.9% respectively), and 26.2% had an educational qualification such as first degree, higher degree, qualified teacher status, qualified medical doctor, qualified dentist, qualified nurse, midwife, health visitor, etc. compared to 19.9% nationwide.

Before the 1801 census, populations were not directly recorded. However estimates can be based on other measures. Historians suggest that in 1086 the town had a population of around 1,500. Indicators for the following centuries are sparse, but it is estimated that the population in the mid-16th century was around 2,000. By the late 17th century this had increased to over 3,000. The 1801 census recorded that 5,592 people lived in Warwick. 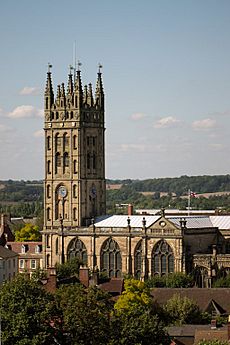 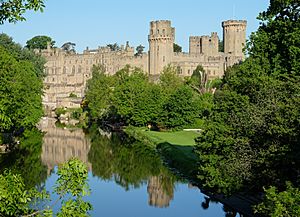 Warwick hosts annual festivals ranging from the Spoken Word to Classical and Contemporary Music to a Folk Festival and a Victorian Evening, held in late November or early December. St. Mary's Church hosts a series of Early Music concerts, and the Bridge House Theatre hosts the Music-in-Round concerts. Warwick Chamber of Trade helps to promote the town for visitors, residents and businesses. The town is also famous for Warwick Castle, the construction of which began in 1068. The town centre is also known for its historic architecture and contains a mixture of Tudor and 17th-century buildings. In recent years several high-profile national and international companies have set-up large office complexes in and around Warwick, notably National Grid plc and IBM.

Warwick is also known for Warwick Racecourse, near the west gate of the medieval town, which hosts several televised horse racing meetings a year. Within the racecourse is a small golf course. Warwick Hospital, Royal Leamington Spa Rehabilitation Hospital and St Michael's Hospital (a psychiatric unit that superseded Central Hospital, Hatton) are situated within the town.

J. R. R. Tolkien seems to have been very influenced by Warwick (where he was married in the Catholic Church of Saint Mary Immaculate) and by its Mercian connections: Lynn Forest-Hill, in an article in the Times Literary Supplement (TLS 8 July 2005 pp 12–13) argues cogently that two important settlements in Tolkien's work were modelled on Warwick — Edoras closely on the early town, and Minas Tirith more remotely on the Norman; and that aspects of the plot of The Lord of the Rings are paralleled in the romance known as Guy of Warwick.

Warwick and its historic buildings have featured in a number of television series, including the BBC's drama series Dangerfield, the period dramas Pride and Prejudice and Tom Jones and Granada Television's Moll Flanders. Parts of the town subbed for Elizabethan and Jacobean era London in the third-series episode two ("The Shakespeare Code") of Doctor Who which ran 7 April 2007.

Warwick has many long established sports clubs including Warwick Hockey Club which was founded in 1920 and Racing Club Warwick F.C. founded a year earlier. 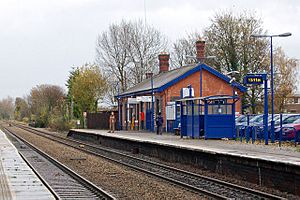 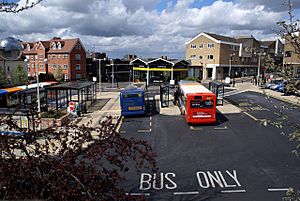 Warwick is on the M40 London-Birmingham motorway, connected to junctions 13, 14 and 15, and is on the A46 dual-carriageway trunk road positioned between Coventry and Stratford-upon-Avon. Warwick has several council off-street car parks in the town. There are also a few privately run car parks, including those at the railway station and the castle. There is also limited on-street parking in some streets, enforcement of which is the responsibility of council parking wardens.

The town has a railway station with direct rail services to Leamington Spa, London, Birmingham and Stratford-Upon-Avon provided by Chiltern Railways. In addition, a few peak-hour trains to and from Birmingham are operated by London Midland. Warwick Parkway, an out-of-town station opened in 2000 to the west of the town, provides popular commuter services to London and Birmingham (with journey times to London from around 1hr 10mins). Historically the Leamington & Warwick Tramways & Omnibus Company operated between the towns from 1881 to 1930.

Bus services to Leamington Spa, Stratford-upon-Avon and Coventry are operated by Stagecoach in Warwickshire from the bus station in the town centre.

There is also a National Express coach stop in the town's bus station with limited services. The nearby Warwick Parkway railway station also has a coach stop with more frequent services.

The Grand Union Canal and the River Avon also pass through the town. The restored Saltisford Canal Arm, is close to the town centre, and is a short branch of the Grand Union Canal. The arm is the remains of the original terminus of the Warwick and Birmingham Canal and dates back to 1799. The Saltisford Canal Trust has restored most of the surviving canal, which is now the mooring for colourful narrowboats and a waterside park open to the public. Over 800 visiting narrowboats come by water to Warwick each year and moor on the arm.

The nearest international airport to Warwick is Birmingham Airport, about 20 miles (32 km) by road from the town centre. There also used to be an RAF station called RAF Warwick.

The town of Warwick has formal twinning arrangements with two European towns: Saumur in France (since 1976) and Verden in Germany (since 1989). Havelberg in Germany has been a friendship town since 1990 when it was adopted by Verden. There is also a friendship link with Bo District in Sierra Leone.

All content from Kiddle encyclopedia articles (including the article images and facts) can be freely used under Attribution-ShareAlike license, unless stated otherwise. Cite this article:
Warwick Facts for Kids. Kiddle Encyclopedia.