Whitnash is a small town contiguous with both Leamington Spa and Warwick in Warwickshire, England. In 2001, it had a population of 7,798 which had increased to 8,806 a decade later.

Whitnash is a very ancient settlement. Its earliest origins can be traced back to pre-Roman occupation. Whitnash has several possible origins as a place name. It could variously mean "at the white ash", "place by the wood", "sacred ash", or even "meeting place of the wise". However, the first meaning is considered most likely to be correct.

By the time of the Domesday Survey in 1086, Whitnash was part of the Stoneleigh Hundreds area, and referred to as Witenas. The population consisted of 11 villagers and 8 smallholders. It remained a small village for many centuries, not even being connected to local towns by anything more than country lanes until around 1850.

Dramatic population growth began during the second half of the 20th century. In the space of a few decades, the population increased by over five times. Reflecting its much larger size, Whitnash became a town on 1 April 1978. 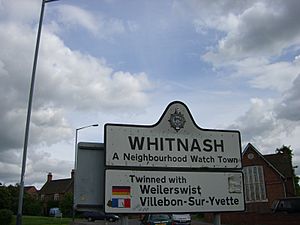 The Whitnash town sign as viewed from the Leamington Spa side

There is no real town centre in Whitnash. The focal point of the old village was the church of St. Margaret's, and with Leamington Spa town centre only 2 miles to the north, a central district for Whitnash never developed and the town only expanded residentially. The church dates back to Saxon times, and has been greatly altered over the years. One of its most notable features was a large elm tree which dominated the open space in front of the church for many years. The tree had to be removed when it became dangerous. A fragment of wood from the Whitnash Elm was donated to the Warwickshire Museum by The Whitnash Society in September 2013. There are two other churches in the town, the Catholic St. Joseph's and the Whitnash Methodist Church.

The Plough and Harrow is a 17th-century building that remains a pub to this day. 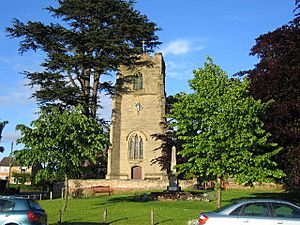 Since the 1990s, the construction of the adjacent Warwick housing estate Warwick Gates has resulted in further local population growth. The administrative border between Whitnash and Warwick runs along a brook near the eastern edge of the estate, meaning that almost all of it is formally in Warwick and outside the boundaries of Whitnash. Despite this, the estate is directly adjacent to Whitnash, and isolated from the main body of Warwick. The combined population of Whitnash with Warwick Gates is over 10,000. Between the two, situated by a pedestrian crossing, is a venerable oak tree, the Whitnash Oak, which may be hundreds of years old.

All content from Kiddle encyclopedia articles (including the article images and facts) can be freely used under Attribution-ShareAlike license, unless stated otherwise. Cite this article:
Whitnash Facts for Kids. Kiddle Encyclopedia.