Royal Leamington Spa, commonly known as Leamington Spa, Leamington, or simply Leam to locals is a spa town in Warwickshire, England. Following the popularisation of the medicinal qualities of its water in the eighteenth century, in the nineteenth century the town experienced one of the most rapid expansions in England. It is named after the River Leam which flows through the town.

The town contains especially fine ensembles of Regency architecture, particularly in parts of the Parade, Clarendon Square and Lansdowne Circus.

The town comprises six electoral wards: Brunswick, Milverton, Manor, Crown, Clarendon and Willes. The total population for those wards in 2011 was 49,491. 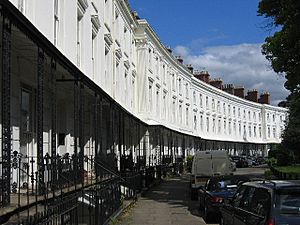 Formerly known as Leamington Priors, Leamington began to develop as a town at the start of the 19th century. It was first mentioned in the Domesday Book of 1086 as Lamintone. For 400 years, the settlement was under the control of Kenilworth Priory, from which the older suffix derived. Its name came from Anglo-Saxon Leman-tūn or Lemen-tūn = "farm on the River Leam". The spa waters had been known in Roman times and the rediscovery in 1784 by William Abbotts and Benjamin Satchwell, led to their commercialisation. Six of the seven wells were drilled for; only the original spring at the site of the Aylesford Well, adjacent to the Parish Church occurred naturally.

Early development of the old town centre was on the southern bank of the River Leam. Later builders began concentrating the town's expansion on the land north of the river, resulting in the Georgian centre of New Town with the Leam flowing between the two. and was subsequently divided, and new public roads were laid out. After the division on the south of the river most of the land east of the village was owned by the Willes family and to the west by Matthew Wise. To the north of the river most of the land was owned by the Willes family, the Earl of Warwick, and Bertie Greatheed. The main landholders of the village and adjacent land were the Earl of Aylesford, and a number of smaller landowners. In the following decades some of the land was sold. By 1901, the population of Leamington had grown from a few hundred to nearly 27,000. 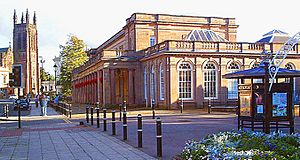 In 1814, the Royal Pump Rooms and Baths were opened close to the River Leam. This grand structure attracted many visitors, expecting cures by bathing in pools of salty spa water. It also included the world's first gravity fed piped hot water system in modern times, which was designed and installed by the engineer William Murdoch. Leamington became a popular spa resort attracting the wealthy and famous, and construction began of numerous Georgian townhouses to accommodate visitors, and a town hall was built in 1830.

With the spread of the town's popularity, and the granting of a 'Royal' prefix in 1838 by Queen Victoria, 'Leamington Priors' was renamed 'Royal Leamington Spa'. Queen Victoria had visited the town as a Princess in 1830 and as Queen in 1858. A statue of Queen Victoria was almost destroyed by a German bomb during the Second World War, and was moved one inch on its plinth by the blast. The statue was not returned to its original position, and the incident is recorded on a plaque on its plinth.

The function of the Royal Pump Rooms changed several times over the following years. While retaining its assembly rooms and medical facilities, around 1863 it was extended to include a Turkish bath and swimming pool, in 1875 the Royal Pump Room Gardens were opened to the public, and in 1890 a further swimming pool was added. The economy of Leamington decreased towards the end of the 19th century following the decline in popularity of spa towns, and it became a popular place of residence for retired people and for members of the middle class who relocated from Coventry and Birmingham, and wealthy residents led to the development of Leamington as a popular place for shopping. In 1997, the owners of the building, the district council, closed the facility for redevelopment, reopening it in 1999 as a culture centre. It now contains Leamington Spa Art Gallery & Museum, a library, a tourist information centre, refurbished assembly rooms and a cafe. Spa water can still be sampled outside the building.

Leamington is closely associated with the founding of lawn tennis. The first tennis club in the world was formed in 1872 by Major Henry Gem and Augurio Pereira who had started playing tennis in the garden of Pereira. It was located just behind the former Manor House Hotel and the modern rules of lawn tennis were drawn up in 1874 in Leamington Tennis Club.

During the Second World War, Leamington was home to the Free Czechoslovak Army; a memorial in the Jephson Gardens commemorates the bravery of Czechoslovak parachutists from Warwickshire. 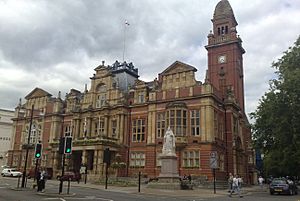 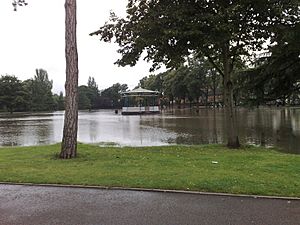 Leamington is divided by the River Leam running east to west, which is susceptible to flooding in extreme weather, with especially heavy floods in 1998 and 2007. 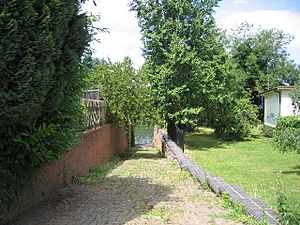 The town has several parks and gardens, including the Jephson Gardens, close to the Royal Pump Rooms and next to the River Leam. These were seriously damaged in the floods of 1998, but have been restored and improved with funding from the National Lottery. The other side of the River Leam, on Priory Terrace features the "Elephant Walk" 19th-century slipway down to the river located near the suspension bridge in Jephson Gardens. It was specifically constructed so that circus elephants in winter quarters in Leamington could be watered. Other parks are the Mill Gardens on the opposite bank of the river to Jephson Gardens, Victoria Park, the Royal Pump Room Gardens, The Dell and Newbold Comyn which includes the nature reserves Welches Meadow and Leam Valley.

The road running through the town centre is the Parade (formerly Lillington Lane until 1860). The shopping street contains high street chains and a covered shopping centre. 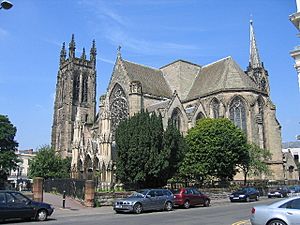 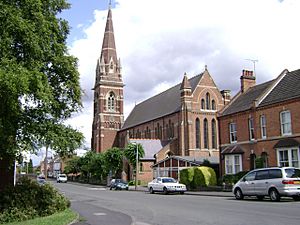 Buildings in the town include a variety of Georgian and early Victorian architecture, and listed buildings such as the Grade II listed Lansdowne Crescent in neo-classical style, designed by William Thomas between 1835 and 1838.

Amongst the Anglican churches in Leamington is the Gothic All Saints' Church. There is also a Catholic church, a United Reformed church, a small mosque and a Hindu temple. In 2009, the Sikh community built the Gurdwara Sahib Leamington and Warwick in Warwick which also serves Leamington.

In August 2010, a Warwickshire Justice Centre was opened in Newbold Terrace, Leamington Spa. As well as a police station, the complex houses the Magistrates' Court, Crown Court, County Court, and other agencies such as the Probation Service and Victim Support. It was officially opened by Queen Elizabeth II on 4 March 2011.

An oak tree just to the northeast of the town centre is marked by a plaque stating that it commemorates the Midland Oak, a tree that grew near the spot and was reputed to be at the centre of England.

The town has enveloped the older village of Lillington. Other suburbs include New Milverton, Campion Hills, and Sydenham to the southeast. The large village of Whitnash is contiguous with the town to the south and is often considered as a suburb.

The data is for wards Brunswick, Milverton, Manor, Crown, Clarendon and Willes.

Leamington Spa Art Gallery & Museum is located in the Royal Pump Rooms, on the Parade. It provides exhibitions in the visual arts and about the history of the town, supported by workshops, talks and other events.

There are several local community centres.

Since 1978, the annual free festival and celebration of alternative culture called the Peace Festival has been held in the Pump Room Gardens.

Live music is provided by local bands in a variety of venues. In December 2005 the band Nizlopi from Leamington, reached Number 1 in the UK Singles Chart with The JCB Song. The Woodbine Street Recording Studios has been used by several well-known music acts such as Paul Weller, Ocean Colour Scene and The Specials. Classical music concerts are organised throughout the year in the Leamington and Warwick area, including the International String Quartet series at the Royal Pump Rooms. The Assembly, is a 1,000 capacity music venue attracting national and international artists, and was awarded 'Live Music Venue of the Year' at the 2010 Music Week Awards. and the Leamington Spa Competitive Festival for Music Dance and Drama has been staged annually since 1910. There is a brass band called the Royal Spa Brass. In May 2016 92 of the local musicians participated in A great day in Leamington Spa, a reconstruction of the 1958 photograph A Great Day in Harlem.

Leamington has been featured in a number of television series, including the 1990s BBC situation comedy Keeping Up Appearances – filmed in and around the area. Notable episodes included one with Walton Hall which had footage of the actual town in them, including the River Leam being featured as a fishing and boating spot. Other series include the drama Dangerfield, BBC's comedy children's show on CBBC ChuckleVision, Broke starring Timothy Spall, and comedy detective series Mayo. In September 2010 scenes for a re-make of the series Upstairs, Downstairs were shot on Clarendon Square and in The Jephson Gardens. In Jonathan Strange and Mr. Norrell, the Duke of Devonshire owns a house here, and offers it to Mr. Norrell as a place to set up a magic school upon the advice of the Earl of Liverpool.

The ancient town of Warwick lies adjoined directly to the west of Leamington, on the opposite bank of the river Avon, and with no natural border to the south-west. Whitnash is a smaller town contiguous with Leamington directly to the south. Cubbington is adjoined to the north-east. Just outside the town lie the villages of Old Milverton to the north and Radford Semele 2.5 miles (4 km) to the east.

Stratford-upon-Avon, famous as William Shakespeare's birthplace and the home of the Royal Shakespeare Company, lies south-west from Leamington Spa along the Warwick Road (A439).

Leamington Spa experiences the oceanic climate which covers most of the United Kingdom. 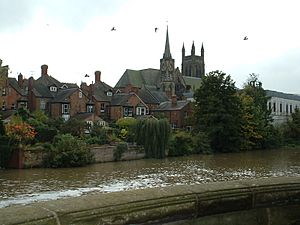 Home of actress Sophie Turner, who plays Sansa Stark on HBO's Game of Thrones. Birthplace of legendary former Middleweight Boxing Champion Of The World Randolph "Randy" Turpin. He was known as the "Leamington Licker". He beat one of the all-time greats Sugar Ray Robinson to be crowned, it is claimed King George himself stopped all proceedings at Buckingham Palace to listen to the fight on the wireless.

Leamington is twinned with:

Leamington has friendship agreements with:

All content from Kiddle encyclopedia articles (including the article images and facts) can be freely used under Attribution-ShareAlike license, unless stated otherwise. Cite this article:
Leamington Spa Facts for Kids. Kiddle Encyclopedia.