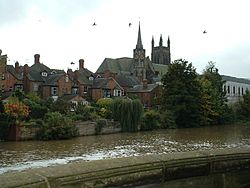 The River Leam in Leamington Spa

The River Leam ( LEM) is a river which rises at Hellidon Hill in Northamptonshire then flows through rural Warwickshire, including the town of Leamington Spa. It flows into the Warwickshire Avon, a left bank tributary of the Severn.

River Leame is given as an alternative spelling in Merriam-Webster's Geographical Dictionary.

All content from Kiddle encyclopedia articles (including the article images and facts) can be freely used under Attribution-ShareAlike license, unless stated otherwise. Cite this article:
River Leam Facts for Kids. Kiddle Encyclopedia.