Rugby is 13 miles (21 km) east of Coventry, on the eastern edge of Warwickshire, near the borders with Northamptonshire and Leicestershire.

The town is credited with being the birthplace of rugby football.

Early Iron age settlement existed in the Rugby area, and a few miles outside what is now Rugby, existed a Roman settlement known as Tripontium. Rugby was originally a small Anglo-Saxon farming settlement, and was mentioned in the Domesday Book of 1086 as Rocheberie. Rugby obtained a charter to hold a market in 1255, and soon developed into a small country market town.

Rugby remained a sleepy country market town until the 19th century and the coming of the railways. In 1838 the London and Birmingham Railway was constructed past it, and in 1840 the Midland Counties Railway made a junction with the London and Birmingham at Rugby. Rugby became an important railway junction, and the proliferation of rail yards and workshops attracted workers. Rugby's population grew from just 2,500 in 1835, to over 10,000 by the 1880s.

In the 1890s and 1900s heavy engineering industries began to set up in the town, and Rugby rapidly grew into a major industrial centre. Rugby expanded rapidly in the early decades of the 20th century as workers moved in. By the 1940s, the population of Rugby had grown to over 40,000.

In the postwar years, Rugby became well served by the motorway network, with the M1 and M6 merging close to the town.

Rugby is most famous for the invention of rugby football, which is played throughout the world. The invention of the game is credited to William Webb Ellis whilst breaking the existing rules of a football match played in 1823 at Rugby School.

Rugby School is one of England's oldest and most prestigious public schools, and was the setting of Thomas Hughes's semi-autobiographical masterpiece Tom Brown's Schooldays. A substantial part of the 2004 dramatisation of the novel, starring Stephen Fry, was filmed on location at Rugby School. Hughes later set up a colony in America for the younger sons of the English gentry, who could not inherit under the laws of primogeniture, naming the town Rugby. The town of Rugby, Tennessee still exists.

Rugby is a birthplace of the jet engine. In April 1937 Frank Whittle built the world's first prototype jet engine at the British Thomson-Houston works in Rugby, and between 1936-41 based himself at Brownsover Hall on the outskirts, where he designed and developed early prototype engines. Much of his work was carried out at nearby Lutterworth. Holography was invented in Rugby by the Hungarian inventor Dennis Gabor in 1947.

In the 19th century, Rugby became famous for its once important railway junction which was the setting for Charles Dickens's story Mugby Junction. 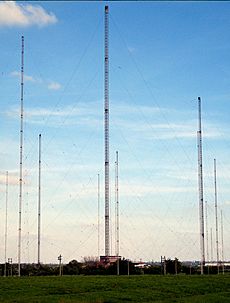 One of the most notable landmarks around Rugby was, until August 2007, the Rugby VLF transmitter, a large radio transmitting station just to the east of the town. The station was opened in 1926 and was used to transmit the MSF time signal. Several of the masts however were decommissioned and demolished by explosives in 2004, although a few, including four of the biggest masts remained until 2007. (Firing the explosive charges was delayed by rabbits gnawing the wires). The remaining four 'tall' masts were demolished on the afternoon of 2 August 2007 with no prior publicity. However the majority of the smaller masts still stand, awaiting demolition before becoming a housing estate

Rugby Cement works, to the west of the town, can be seen for many miles. Standing at just 115 metres high, the landmark is not a popular one— in 2005 it came in the top ten of a poll of buildings people would like to see demolished on the Channel 4 television series Demolition. In October 2006, the owners of the Rugby Cement works, Cemex, were fined £400,000 for excessive pollution after a court case brought by the Environment Agency. 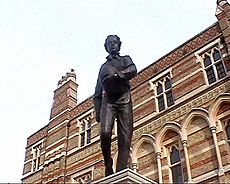 The town has statues of three famous locals: Rupert Brooke, Thomas Hughes and William Webb Ellis. The Rupert Brooke statue is situated at the forked junction of Regent Street on the green and commemorates his contribution to poetry. Thomas Hughes' statue stands in the gardens of the Temple Reading Rooms (the central library of Rugby school) on Barby Road. Since England won the Rugby World Cup in 2003, the William Webb Ellis statue outside Rugby School is one of the most visited parts of the town. 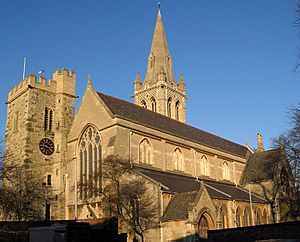 St Andrew's Church, in the town centre, is Rugby's original parish church. A church has stood on the site since the 13th century. The church was extensively re-built and expanded in the 19th century, designed by William Butterfield. The expanded church included a new east tower, which has a spire 182 feet (55 m) high. However some parts of the older medieval church were retained, most notably the 22 metre high west tower which bears strong resemblance to a castle turret. The west tower was probably built during the reign of Henry III (1216–1272) to serve a defensive as well as religious role, and is Rugby's oldest building. The church has other artefacts of medieval Rugby including the 13th-century parish chest, and a medieval font. 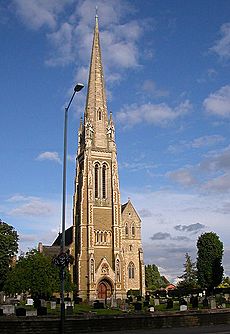 Rugby's main Roman Catholic church is St. Maries [1] on Dunchurch Road. It is one of the town's most well-known landmarks as it is quite dominant on the skyline. Its spire is the tallest in Warwickshire . The church was built in 1872, designed by Pugin in the Early English style.

Places of interest in the town include:

Places of interest around Rugby include:

Rugby is near several major trunk routes including the M6, M1 and M45 motorways and the A45 road. Other less important main roads include the A426 road, the A428 road and the Rugby Western Relief Road, linking the A45 with the Leicester Road, that connects with the Motorway at Junction 1 of the M6.

Buses run to Coventry, Southam, Leamington Spa, Daventry, Leicester and Northampton as well as serving the major estates of the town on a regular basis.

Rugby railway station is served by the West Coast Main Line, and has frequent regular services to London Euston , Birmingham New Street, Stafford and Crewe. There are also some albeit very infrequent services between Rugby and Glasgow Central, the North West of England, Shrewsbury Chester, and Holyhead. Rugby Rail Users Group is campaigning hard to secure more direct express services down the Trent Valley main line to Crewe, Preston and beyond.

Rugby has had a railway station since 1838, when the London and Birmingham Railway was opened, though the present station dates from 1885. Rugby station used to be served by lines which have now been closed, including lines to Leicester. Leamington Spa, and Peterborough. These were closed in the 1960s under the Beeching axe

Between 1899 and 1969, Rugby had a second station; Rugby Central station on the former Great Central Main Line which had services to London Marylebone to the south and Leicester, Nottingham and Shefffield to the north. The station and line were closed under the Beeching Axe.

The British Railways steam locomotive testing centre was in Rugby.

Warwickshire County Council proposed a new station to serve Rugby called Rugby Parkway station, which will be on the Northampton Loop Line, south-east of the existing station, serving the Hillmorton area of the town. The station is to be built in between the current edge of town and DIRFT to accommodate for the future expansion of the town where 2600 homes are planned to be built over a 15 to 20-year period. Construction work on the new station is due to begin in May 2018 and it is planned to open in 2019.

There are direct rail links to the nearest major airport Birmingham Airport. The smaller Coventry Airport is nearby.

The Oxford Canal runs along the north edge of Rugby, but south of the new housing estates round Brownsover.

Rugby is twinned with:

All content from Kiddle encyclopedia articles (including the article images and facts) can be freely used under Attribution-ShareAlike license, unless stated otherwise. Cite this article:
Rugby, Warwickshire Facts for Kids. Kiddle Encyclopedia.