The Oxford Canal is a 78-mile (126 km) narrow canal in central England linking Oxford with Bedworth (between Coventry and Nuneaton on the Coventry Canal) via Banbury and Rugby. Completed in 1790, it connects to the River Thames at Oxford and is integrated with the Grand Union Canal—combined for 5 miles (8 km) close to the villages of Braunston and Napton-on-the-Hill, a canal which soon after construction superseded much of its traffic.

The canal was for about 15 years the main canal artery of trade between the Midlands and London; it retained importance in its local county economies and that of Berkshire. Today the canal is frequently used for weekend and holiday narrowboat pleasure boating.

The Oxford Canal traverses Oxfordshire, Northamptonshire and east Warwickshire through broad, shallow valleys and lightly rolling hills; resembling the bulk of the Grand Union Canal and its branches, much of the landscape is similar to the those of the Llangollen and Lancaster canals. It has frequent wharves and public houses, particularly if including the parts of the Grand Union Canal immediately adjoining. North of about a third of its distance, namely from Napton, the canal's route northeast and then northwest forms part of the Warwickshire ring. At its southern extremity it forms a waterway circuit within Oxford known as the Four Rivers. 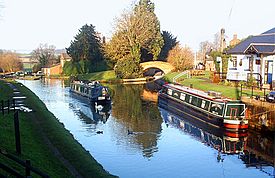 The canal and locks at Hillmorton 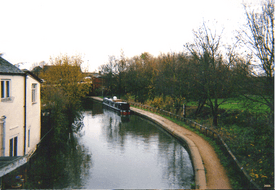 The Oxford Canal in Banbury town during the autumn.

The canal begins in Warwickshire near Hawkesbury Village at Hawkesbury Junction, also known as Sutton Stop, where it connects with the Coventry Canal, a little over 4 miles (or about 7 km) from the centre of Coventry and five miles (8 km) from Nuneaton. Within a mile were the late 18th- and 19th-century coal field/pit and colliery of the small town of Bedworth. From Hawkesbury, it runs southeast through the Warwickshire countryside for 15 miles (24 km) to Rugby.

The route between Coventry and Rugby is level, with no locks, apart from the stop lock at the junction. Parts of this section were straightened by raising and waterproofing in the 1820s; the remains of a more circuitous route (which kept to the chosen contour) can still be seen in places.

The canal winds through the northern part of Rugby. It passes through the 270-yard (250 m) Newbold Tunnel. In the churchyard in Newbold-on-Avon remains can be seen of an earlier canal tunnel built in the 1770s. It scales a flight of three locks at Hillmorton about three miles (5 km) east-southeast of the town.

East of Rugby, the canal passes southwest then south. It crosses under the M45 motorway and through broad low fields interspersed by views of wooded knolls and modest hills of Northamptonshire and Warwickshire to reach Braunston.

West of Braunston village centre, by a pub, the canal converges with the Grand Union Canal where both change direction to west-southwest. The latter canal has a major wharf, Braunston Marina, 770 yards (700 m) east and a campsite. The combined canal splits north of Napton-on-the-Hill:

After winding round Napton Hill, the canal ascends the Napton flight of nine locks to a local summit reach, well below the hilltop. After passing an old wharf and a pub at Fenny Compton, the canal enters a long cutting which until some time in the 19th century was a tunnel. This section is normally referred to as a "tunnel straight" or the Fenny Compton Tunnel.

The route between the farms of Priors Hardwick and Fenny Compton was never straightened, and is the most circuitous in the region: taking 5 1⁄2 miles (9 km) to cover 2.2 miles (3.5 km) (geodesically, as the crow flies). This coincides with the canal's highest "summit" reach in navigational terms. This reach is the "eleven-mile pound" mentioned in Tom Rolt's Narrow Boat.

The canal then descends the Claydon flight of locks and into the vale of the nascent Cherwell at Cropredy. The canal descends the valley to Oxford. 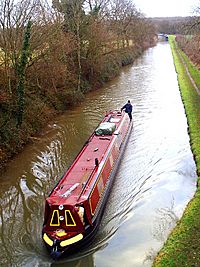 A canal boat on the canal near Brinklow on the long stretch between Coventry and Rugby.

Banbury has many visitor moorings alongside the historic and modern shopping areas in the middle of town. Banbury Town Council and Cherwell District Council treat the canal as an attraction to be encouraged; examples of its work include an old boatyard which has been incorporated into the town centre: Tooley's Historic Boatyard. About four miles (6 km) south is a lightly-settled locality, Twyford Wharf, where narrow boats up to 60 feet (18 m) can be turned. Two villages nearby, Kings Sutton and Adderbury (Twyford), are within 30 minutes' walking distance along the road. Both offer several pubs.

Within Oxford's conurbation, the end of the canal has two links to the Thames:

The locks on the canal are as follows. 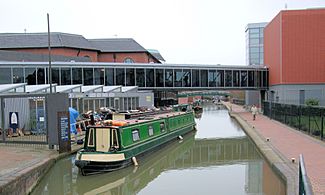 The Oxford Canal passes mainly through the Oxfordshire, Northamptonshire and Warwickshire countryside, and is often considered to be one of the most scenic canals in Britain. The construction of the Oxford Canal in 1790 aided Banbury's growth. The shot is taken at Tooley's Boatyard, Banbury.

The Oxford Canal was constructed in several stages over a period of more than twenty years.

In 1769 an Act of Parliament authorising the Oxford Canal was passed, having been promoted in Parliament by Sir Roger Newdigate MP, who chaired the canal company. The intention was to link the industrial English Midlands to London via the River Thames. Construction began shortly after near Coventry.

Surveying of the route and initial construction were originally supervised by the celebrated engineer James Brindley, assisted by Samuel Simcock who was also Brindley's brother-in-law. Brindley died in 1772 but Simcock took over and completed the canal. By 1774 the canal had reached Napton, but the company was already running out of money.

In 1775, a second Act was passed allowing the company to raise more funds. Construction soon started again and by 1778 the canal had reached Banbury. Financial problems meant that work on the final stretch to Oxford did not begin until 1786.

A stretch of the River Cherwell at Shipton-on-Cherwell was incorporated into the canal. This reduced construction costs, but the behaviour of the river makes the canal more difficult to use. This was a false economy and its adverse effects continue to be felt to this day.

The Oxford Canal reached the outskirts of Oxford in 1789, when a coal wharf was opened at Heyfield Hutt, now the site of Hayfield Road. The final section into central Oxford was ceremonially opened on 1 January 1790.

For the next 15 years the Oxford Canal became one of the most important and profitable transport links in Britain, with most commercial traffic between London and the Midlands using the route. Its principal traffic was coal from Warwickshire. It also carried stone, agricultural products and other goods. 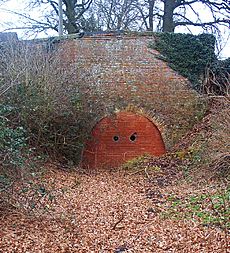 A much more direct route between London and the Midlands, the Grand Junction Canal, was completed in 1805. Much of the London-bound traffic switched to this faster route, as it avoided the passage of the River Thames which still had many flash locks. This greatly reduced Oxford Canal traffic south of Napton. However, the short section between Braunston and Napton became the link between the Warwick and Napton Canal and the Grand Junction Canal, making it part of the busy direct route between Birmingham and London.

The Oxford Canal was originally built as a contour canal, meaning that it twisted around hills to minimise vertical deviations from a level contour. However, with one eye on the developing railway network, in 1827 Mr. Brunel[Which Brunel?] re-surveyed the northern section of the canal between Braunston and Hawkesbury Junction to straighten it out and reduce navigation time. This work between 1830 and 1834 reduced the distance by 14 3⁄4 miles (23.7 km). The section south of Napton was never straightened. The straightening challenged the capacity of three locks at Hillmorton, the first on the canal after the stop lock at Hawkesbury Junction. The solution to the congestion was to duplicate or twin the existing locks at Hillmorton, creating three pairs of two parallel narrow locks, which allowed twice the traffic to pass the lock at any time. The work to double the locks was completed in August 1840. Not only was the capacity doubled, but the time taken was decreased as the locks were narrower. Tests showed that the locks could be operated in as little as 1 minute 20 seconds.

In 1833 a section of the new line of canal in Barby Fields near Dunchurch was used as a test site for a new wrought iron boat, Swallow, built by Graham and Houston. Drawn by two horses, the boat completed a distance of 1.5 mile in 7 minutes 35 seconds, a speed of almost 12 miles per hour.

The northern section of the Oxford Canal between Coventry, Braunston and Napton remained an important trunk route, and remained extremely busy with freight traffic until the 1960s. The staple traffic was coal from the Warwickshire and Leicestershire coalfields to London via the Grand Union Canal. However, the southern section from Napton to Oxford became something of a backwater, and carried mostly local traffic. 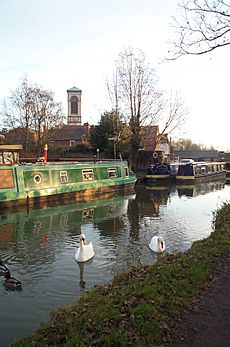 Looking from the Oxford Canal towards Jericho, with the campanile tower of St Barnabas Church in the background.

In 1937 Baron Nuffield (Later Viscount Nuffield) bought the canal basin at Oxford for £133,373 (equivalent to £6,167,200 in 2021). In 1951 he filled it in and built Nuffield College on part of the former coal wharf. Coal traffic was relocated to a canal wharf in Juxon Street, in Jericho, Oxford. The goods wharf and the remainder of the coal wharf are now under a public car park that Nuffield College lets to Oxford City Council.

The Oxford Canal remained independent until it was nationalised in 1948 and became part of the Docks and Inland Waterways Executive, later the British Waterways Board.

Many Oxford Canal boatmen and women favoured horse traction long after those on other canals had changed their narrowboats to diesel power. One narrowboat carrying coal on the Oxford Canal was drawn by a mule until 1959 and was the last horse-drawn freight narrowboat in Great Britain. This boat, Friendship, is preserved at the National Waterways Museum, Ellesmere Port.

The Oxford Canal remained profitable until the mid-1950s, paying a dividend right up until nationalisation. As with most of Britain's narrow canal system, the Oxford Canal suffered from a rapid decline in freight traffic after the Second World War. By the mid-1950s very few narrowboats traded south of Napton and the southern section was at one point being threatened with closure, although the northern section (Napton to Coventry) remained well-used by commercial traffic until the 1960s.

During the 1960s pleasure boating began to grow in popularity and replace the old trading boats, After a fact-finding cruise on the canal, Barbara Castle (Minister for Transport) rejected a proposal for closure.

The canal is now thriving. In the summer it is one of the most crowded canals on the network.

The towpath of the canal, with a 5 1⁄2-mile (9 km) extension from Hawkesbury Junction to Coventry on the towpath of the Coventry Canal, forms the 82-mile (132 km) Oxford Canal Walk. The 10-mile (16 km) stretch from Oxford to Kirtlington, where the Oxfordshire Way meets the canal, is also part of European walking route E2. The Canal Walk is popular with geocachers with many Geocache sites located alongside the canal.

All content from Kiddle encyclopedia articles (including the article images and facts) can be freely used under Attribution-ShareAlike license, unless stated otherwise. Cite this article:
Oxford Canal Facts for Kids. Kiddle Encyclopedia.