King's Sutton is a village and civil parish in West Northamptonshire, England in the valley of the River Cherwell. The village is about 4.1 miles (6.6 km) south-east of Banbury, Oxfordshire.

The parish includes the hamlets of Astrop contiguous with eastern end of King's Sutton and Upper Astrop about 1 mile (1.6 km) north-east, in the same area as the shrunken villages of Great and Little Purston.

Blacklands, in the parish 0.5 miles (800 m) north of the village, is the site of a Roman town. Coins from the 4th century AD have been recovered from the site.

The English Civil War helped develop Banbury’s then arms industry. The Royalist garrison was constantly at work early in 1645 digging saltpetre in King's Sutton and making gunpowder out of it in a house specially built near Banbury. Just over 10 years earlier a government saltpetreman had operated at Banbury for a year, having moved there from the then small market town of Coventry, before moving on to Hook Norton a short while afterwards. King's Sutton was a local centre for saltpetre excavation and digging at the time.

The oldest parts of the Church of England parish church of Saints Peter and Paul are the Norman font and largely Norman chancel. The north aisle was added in the 13th century and the south aisle early in the 14th century. The bell tower and most of the windows are Decorated Gothic. The spire was added to the tower probably late in the 14th century, raising the steeple to a height of 198 feet (60 m). Sir Nikolaus Pevsner considered it "one of the finest, if not the finest, spire in this county of spires". The south porch, north aisle, west window and very fine east window of the chancel are Perpendicular Gothic.

Ss. Peter & Paul parish is now part of a single Church of England benefice with the adjacent parish of Newbottle and Charlton.

The Court House was built in about 1500, partly of stone and partly timber-framed. It was altered in the 16th and 18th centuries.

The manor house was built in the middle of the 17th century. 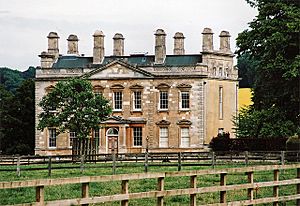 Astrop house is a Grade II* listed country manor about 1 mile (1.6 km) north-east of the village. It is constructed of limestone ashlar in two storeys with a 7-bay frontage

It was built c.1740 for Sir John Willes, Chief Justice of the Court of Common Pleas. Sir John Soane added wings for the Revd. William Shippen Willes, which were extended in the 19th century and demolished in 1961. William Wilkinson added the Keeper's lodge, pheasantry and a cottage in 1868. Lancelot "Capability" Brown laid out the grounds.

Astrop was the site of a famous Spa discovered in the 17th century. All that now remains is a small well known as St. Rumbald's Well, south of the house in a valley (see "History" section).

The Oxford and Rugby Railway between Oxford and Banbury was built between 1845 and 1850, passing through the west of King's Sutton parish between the village and the River Cherwell. The Great Western Railway had taken the line over by the time it opened, and in 1872 the GWR opened King's Sutton railway station for the village. Chiltern Railways trains to London Marylebone, Birmingham Snow Hill, Great Western Railway (train operating company) services to Oxford and Didcot Parkway now serve the station. 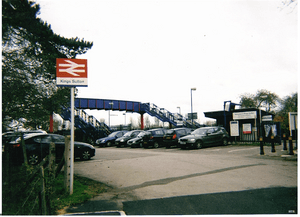 King's Sutton railway station was upgraded and regained its footbridge in 2009. When the footbridge was erected, both a new shelter was added and the fencing was improved.

The village has a parish council with 15 members.

King's Sutton Heritage Trust Fund was formed in December 2005 with a Mission Statement which reads 'To promote, protect and enhance the history, facilities, structures, and amenities of the village of King's Sutton and the surrounding area for the benefit of its inhabitants. 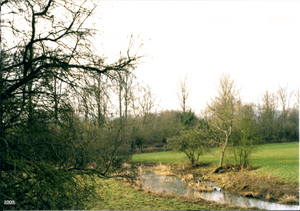 A picture of farmland outside the village of King's Sutton in Northamptonshire.

Kings Sutton Primary School is in Richmond Street. It celebrated its centenary in 2008. Its last Ofsted report was in 2010 and gave the school grade 2, stating: "This is a good school. The new headteacher provides focused leadership so that all the staff are supporting the good quality of education for the pupils." The school used to be in Astrop Road and those premises are now a private house. Kings Sutton has also a pre-school.

There is a lawn tennis club.

All content from Kiddle encyclopedia articles (including the article images and facts) can be freely used under Attribution-ShareAlike license, unless stated otherwise. Cite this article:
King's Sutton Facts for Kids. Kiddle Encyclopedia.