Sir John Soane (10 September 1753 – 20 January 1837) was an English architect who specialised in the Neo-Classical style. His architectural works are distinguished by their clean lines, massing of simple form, decisive detailing, careful proportions and skilful use of light sources. The influence of his work, coming at the end of the Georgian era, was swamped by the revival styles of the 19th century. He received a knighthood in 1831.

His best-known work was the Bank of England (his work there is largely destroyed), a building which had a widespread effect on commercial architecture. He also designed Dulwich Picture Gallery, which, with its top-lit galleries, was a major influence on the planning of subsequent art galleries and museums.

His main legacy is an eponymous museum in Lincoln's Inn Fields, which comprises his former home and office, designed to display the art works and architectural artefacts that he collected during his lifetime. The museum is described in the Oxford Dictionary of Architecture as "one of the most complex, intricate, and ingenious series of interiors ever conceived".

Soane was born in Goring-on-Thames and educated in nearby Reading, the son of a bricklayer. Soane trained as an architect, first under George Dance the Younger, and then Henry Holland, while also studying at the Royal Academy schools, which he entered in 1771. During his studies at the Royal Academy, he won the Academy's silver medal (1772), gold medal (1776) and finally a travelling scholarship in 1777, which he spent on developing his style in Italy. 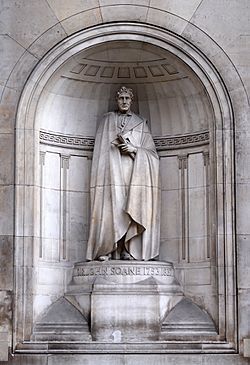 Statue of Sir John Soane at the Bank of England, London

When in Rome, Soane travelled around with his old classmate, the architect Thomas Hardwick, and also met the builder and Bishop of Derry, Frederick Augustus Hervey, whom he accompanied to Ireland. However, he failed to find work there, so returned to England in 1780 and settled in East Anglia where he established a small architectural practice.

In 1788was commisioned as the architect and surveyor to the Bank of England, the exterior of the Bank being his most famous work. The Bank job, and especially the personal contacts arising from it, increased the success of Soane's practice, and he became Associate Royal Academician (ARA) in 1795, then full Royal Academician (RA) in 1802. He was made Professor of Architecture at the Royal Academy in 1806, a post which he held until his death. Then, in 1814, he was appointed to the Metropolitan Board of Works, where he remained until his retirement in 1832. In 1831, Soane received a knighthood.

During his time in London, Soane ran a lucrative architectural practice, remodelling and designing country homes for the landed gentry. Among Soane's most notable works are the dining rooms of both numbers 10 and 11 Downing Street for the Prime Minister and Chancellor of Britain, the Dulwich Picture Gallery which is the archetype for most modern art galleries, and his country home at Pitzhanger Manor in Ealing.

Soane died, a widower in London in 1837. He is buried in a vault of his own design in the churchyard of St Pancras Old Church. The design of the vault was a direct influence on Giles Gilbert Scott's design for the red telephone box. 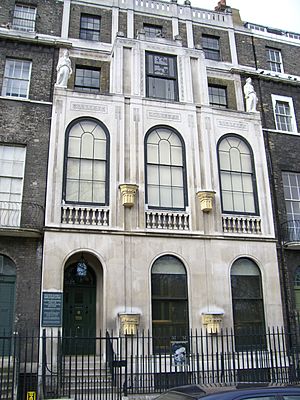 In 1792, Soane bought a house at 12 Lincoln's Inn Fields, London. He used the house as his home and library, but also entertained potential clients in the drawing room. It is now Sir John Soane's Museum and is open to the public.

Between 1794 and 1824, Soane remodelled and extended the house into two neighbouring properties — partly to experiment with architectural ideas, and partly to house his growing collection of antiquities and architectural salvage. As his practice prospered, Soane was able to collect objects worthy of the British Museum, including the sarcophagus of Seti I, Roman bronzes from Pompeii, several Canaletto's and a collection of paintings by Hogarth.

In 1833, he obtained an Act of Parliament to bequeath the house and collection to the British Nation to be made into a museum of architecture, now the Sir John Soane's Museum.

All content from Kiddle encyclopedia articles (including the article images and facts) can be freely used under Attribution-ShareAlike license, unless stated otherwise. Cite this article:
John Soane Facts for Kids. Kiddle Encyclopedia.