The Royal Belfast Academical Institution, is a grammar school in Belfast, Northern Ireland. Locally referred to as Inst, the school educates boys from ages 11 to 18. It is one of the eight Northern Irish schools represented on the Headmasters' and Headmistresses' Conference. The school occupies an 18-acre site in the centre of the city on which its first buildings was erected. 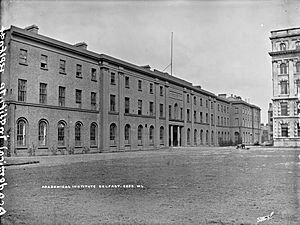 The first demands for the school which would become "Inst" came from a group of Belfast merchants, and professional gentlemen. They insisted that the existing Belfast Academy under William Bruce did not offer a "complete, uniform, and extensive system of education." They hoped that a new school would give more access to the ‘higher' branches of learning as well as to those which would fit youths for a practical commercial career. The foundation stone of Inst. was laid, in pouring rain, on 3 July 1810 by George Augustus Chichester, 2nd Marquess of Donegall. Donegall owned much of the land in the Belfast area and granted the school a lease for the grounds at an annual rent of £22–5s–1d. The eminent English architect John Soane, who designed the new Bank of England in 1788, offered to draw up plans in 1809.

Building began in 1810. Money was collected to pay for the buildings by encouraging rich merchants and businessmen to subscribe one hundred guineas each for the privilege of being able to nominate one boy to receive free education at Inst. The roof of the main building was completed during the winter of 1811. The Institution was formally opened at 1:00pm on 1 February 1814. William Drennan announced that the aim was to ‘diffuse useful knowledge, particularly among the middling orders of society, as a necessity, not a luxury of life.' He also referred to the particularly noble and rural setting of the school – in front a fair and flourishing town, and backed by a sublime and thought-inspiring mountain. Until the middle of the 19th century, the RBAI was both a school and a university, a dual function which the Belfast Academy never had.

The school has an "old boys" club known casually as Instonians and formally as the Belfast Old Instonians Association (BOIA). At present the Rugby, Golf and Cricket section of the club are open for all to join, whilst the Hockey club is still open to past members of the school only. Originally set up as an "old boys" only club, the sports club was opened up to the public in response to the notable flow of Instonians to Great Britain for further education, many of whom did not return to Northern Ireland. This led to fears that the club would die out as current members grew older but were replaced by less and less 'new blood',

Royal Belfast Academical Institution has a preparatory department called Inchmarlo, founded in 1907 and now set in a 6-acre (24,000 m2) site on Cranmore Park, off the Malone Road in South Belfast. Inchmarlo House was the former home of Sir William Crawford, a Director of the York Street Flax Spinning Mill. It employs 11 full-time staff and caters for boys aged between 4 and 11 whose standard uniform consists of traditional school-caps, shorts, knee-high socks, school-blazers and leather satchels. It constantly attains impressive results in the 'eleven-plus exam11-plus' examination with 75% of pupils gaining an 'A' grade. Of those, approximately 99% (around 40) transfer to the main school every year. The Headmaster of Inchmarlo Preparatory School is Andy Smyth, and his Vice Principal is Malcolm Guy.

All content from Kiddle encyclopedia articles (including the article images and facts) can be freely used under Attribution-ShareAlike license, unless stated otherwise. Cite this article:
Royal Belfast Academical Institution Facts for Kids. Kiddle Encyclopedia.