Kids Encyclopedia Facts
This page is about the Irish businessman. For German singer, see Thomas Anders. 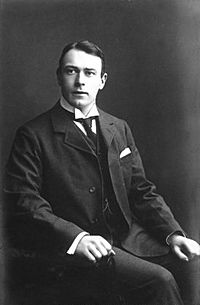 Thomas Andrews (7 February 1873 - 15 April 1912) was an Irish businessman. He designed the RMS Titanic. He was married and had a girl who was born in 1908. He died during the sinking of the Titanic in 1912. In the movie Titanic by James Cameron, he was portrayed by actor Victor Garber.

Mr. Thomas Andrews was enrolled into the Royal Belfast at age 11 and left at the age of 16 so that he could go and work for Harland and Wolf as a premium apprentice. At the end of his Apprentice he would be guaranteed a position at the shipyard. Mr. Andrews was made manager of the construction works in 1901; in 1901 he was awarded with the honor of being Manager Director. Andrews as a child had a rich home, good family and his parents were able to support him and his family very well. His father was a distinguished local politician and his mother Eliza was Lord William parries sister, his uncle was a high court judge and his brother who was to become Northern Irelands Prime Minister. Mr. Andrews was a first class passenger of the titanic and was born on February 7th 1873 and died on April 15th 1912 at sea. Mr. Andrews died while the ship was sinking; One of the most famous legends of the sinking of the Titanic is that he was last seen staring at the painting in the first class smoking room, making no attempt to save himself. But this story, which was published in a 1912 book (Thomas Andrews: Shipbuilder) and therefore perpetuated, came from John Stewart, a steward on the ship who in fact did leave the ship in boat n. 15 at approximately 1:40 a.m.

There were testimonies of sightings of Andrews after that moment. It appears that Andrews stayed in the smoking room for some time to gather his thoughts, then he continued assisting with the evacuation. Another reported sighting was of Andrews frantically throwing deck chairs into the ocean for passengers to use as floating devices. Andrews was then seen making his way to the bridge while carrying a lifebelt, possibly the same lifebelt Andrews had draped over a chair in the Smoke Room. Andrews was last seen leaving the ship at the last moment; his body was never recovered.

Newspaper accounts of the disaster labeled Andrews a hero. Mary Sloan, a stewardess on the ship, whom Andrews persuaded to enter a lifeboat, later wrote in a letter: "Mr. Andrews met his fate like a true hero, realizing the great danger, and gave up his life to save the women and children of the Titanic.

All content from Kiddle encyclopedia articles (including the article images and facts) can be freely used under Attribution-ShareAlike license, unless stated otherwise. Cite this article:
Thomas Andrews Facts for Kids. Kiddle Encyclopedia.