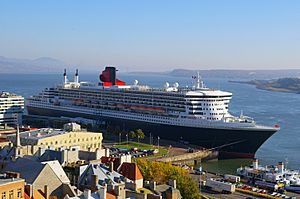 Queen Mary II, one of the last ocean liners, in Quebec 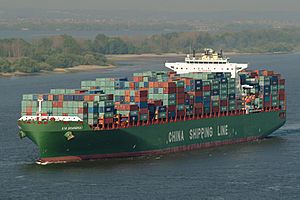 Container ships such as this one, are sometimes also called ocean liner

Ocean liner is the name given to (usually large) ships that are used to transport people or goods. These ships travel along given routes; they usually have a schedule. Usually, ocean liners travel long distances. The ships used for short distances, for example across a channel, a lake, or between an island and the coast close by, are called ferries. Ocean liners are used for transportation. Cruise ships are different, they are used for pleasure.

In the second half of the 20th century, ocean liners have been replaced by aircraft more and more.

All content from Kiddle encyclopedia articles (including the article images and facts) can be freely used under Attribution-ShareAlike license, unless stated otherwise. Cite this article:
Ocean liner Facts for Kids. Kiddle Encyclopedia.