Port Eliot in the parish of St Germans, Cornwall, England, United Kingdom, is the ancestral seat of the Eliot family, whose present head is Albert Eliot, 11th Earl of St Germans.

Port Eliot comprises a stately home with its own church, which serves as the parish church of St Germans. An earlier church building was Cornwall's principal cathedral. The house is within an estate of 6,000-acre (2,400 ha) which extends into the neighbouring villages of Tideford, Trerulefoot and Polbathic. Both house and garden are Grade I listed. 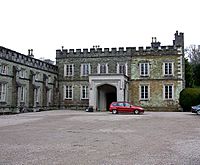 The main entrance to Port Eliot 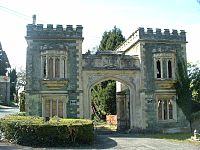 Originally built as a priory with adjoining St Germans Priory Church, parts of the house date back to the 12th century. It was substantially altered and remodelled in the 17th and 18th centuries by noted architects including Sir John Soane.

In the 18th and 19th centuries, the Eliot family invested substantially in the estate, building numerous farmhouses, fishermen's cottages and other dwellings across the land. Many of these remain part of the estate to this day and are rented out to local residents and friends of the family. Some properties, mainly lying remote from the estate, have been sold in recent years. In 2014, the 700-hectare estate was purchased by the Duchy of Cornwall.

In 1980 a small festival which had outgrown its site at Polgooth in mid-Cornwall approached the Port Eliot estate and asked if it could be held in the idyllic grounds. The estate office agreed a price, and there began the Elephant Fayre, one of the most eclectic festivals of the 1980s. The festival ran from 1981–1986, beginning with some 1,500 visitors over four days, and featured a mix of music, theatre and visual arts. Over the years the festival grew, attracting crowds of up to 30,000 and bands such as The Cure, The Fall and Siouxsie and the Banshees. The burning down of the oldest tree in the park, looting of the village surgery and the robbing of stall-holders in 1985 prompted Lord Eliot and fellow organisers to make the 1986 festival the last.

In March 2008 the house and grounds opened to the public for the first time, for 100 days, and attracted 12,000 visitors. Following extensive water damage to parts of the building, renovation work means the house and gardens will not be fully open during 2020. although some areas of the gardens will still be accessible during public ticketed events and there may be limited access to some areas of the house.

All content from Kiddle encyclopedia articles (including the article images and facts) can be freely used under Attribution-ShareAlike license, unless stated otherwise. Cite this article:
Port Eliot Facts for Kids. Kiddle Encyclopedia.