Jericho is an historic suburb of the English city of Oxford. It consists of the streets bounded by the Oxford Canal, Worcester College, Walton Street and Walton Well Road. Located outside the old city wall, it was originally a place for travellers to rest if they had reached the city after the gates had closed. The name Jericho may have been adopted to signify this 'remote place' outside the wall. 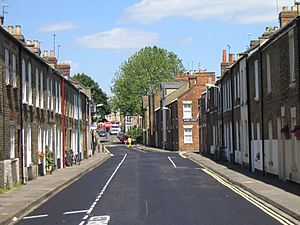 This was originally an industrial area which grew up because of its proximity to the Oxford Canal, which arrived in 1790. The Eagle Ironworks (now redeveloped into apartments), wharves and the Oxford University Press were based there and its residential streets are mostly 'two-up, two-down' Victorian workers' houses. With back streets of 19th century terraced housing and many restaurants, it has become a popular area for student and London commuter accommodation.

Many reports from the 1870s suggest that early homes in Jericho were built with very poor drainage. Low-lying land and lack of basic drainage in these homes would result in flooding. Flooding, open sewers, and overcrowding resulted in deaths from diseases such as typhoid and dysentery, with five out of eleven typhoid deaths[in Oxford?] in 1873 originating from Jericho.

In the early 1960s there were plans to demolish it and replace it with light industrial units and new housing. However, many people objected and campaigned to save this historic area, rallied by local city councillor Olive Gibbs and the Jericho Residents Association. As a result, the plans were changed. Those houses beyond repair were demolished, but many others were upgraded in the late 1960s and early 1970s with the help of council grants. This encouraged many young professionals and families to move in; and subsequently Jericho became one of Oxford's most sought-after areas. Large council and social housing developments were built in the 1970s and 1980s. 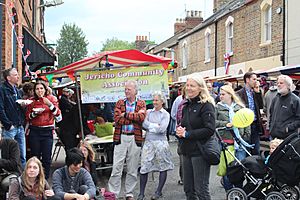 Jericho retains a strong community spirit. The Jericho Community Association runs the Jericho Community Centre in Canal Street, maintains the community website, Jericho Online, and organizes the annual Jericho Street Fair which is held in mid-June each year, around the feast day of the patron saint Barnabas (11 June). It is also the focus for other community activities and has also been very active in campaigning for responsible development of the canal-side land behind St Barnabas Church, on a part of which it plans to build a new Community Centre as one of the four members of the Jericho Wharf Trust . Jericho is served by a primary school, St Barnabas Primary School, a large primary school where over 50% speak English as a second language.

Appropriately for its biblical name, Jericho is also known for its iconic places of worship. The Church of England parish church is the Anglo-Catholic St Barnabas Church, next to the Oxford Canal. St Sepulchre's Cemetery lies off Walton Street, which has no associated church and has lost its chapel. The Albert Street Chapel (Reformed Baptist) is also in the neighbourhood. The Oxford Synagogue (one of the few in England with more than one denomination of Judaism worshipping in the same house) and the Oxford Jewish Centre are in Jericho.

Castlemill Boatyard is a 160-year-old wharf on the canal in Jericho, previously owned by British Waterways and now closed. British Waterways sold the site to a company that subsequently went into administration. The land has been bought by a developer but has yet to be developed. The Jericho Wharf Trust has been negotiating with the developer to develop the site as a focus for community activities including a new boatyard and community centre. One of the members of the Jericho Wharf Trust is Jericho Community Boatyard Ltd which has been set up to restore services for Oxford boaters.

All content from Kiddle encyclopedia articles (including the article images and facts) can be freely used under Attribution-ShareAlike license, unless stated otherwise. Cite this article:
Jericho, Oxford Facts for Kids. Kiddle Encyclopedia.