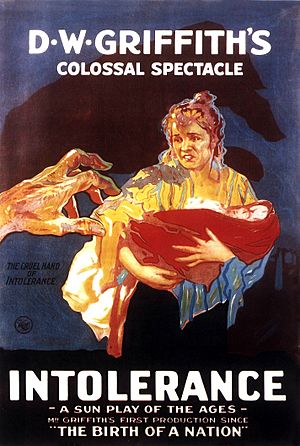 Art films are a type of movie that is very different from the popular Hollywood blockbuster movies. Art films have many other names. Some people call them art movies, independent films, indie films, arthouse films, auteur films ("auteur" is a French word which means "author") or experimental films.

Art films often show controversial or sad stories. These types of movies may have sad endings. They are sometimes hard to understand, because the movie may be about people's feelings, thoughts, or dreams.

For these reasons, art films are not shown in many cinemas or theaters. This means that art films do not have large audiences and do not make a lot of money. They are generally promoted by people who see the movie and then tell their friends to go see it.

A comparison of an art movie and a blockbuster movie

The opposite of an art film is a popular blockbuster movie. Blockbuster movies have famous actors and large budgets. They are made so that millions of people will pay money to see the movie.

Blockbuster movies often have very large budgets. This money is used to pay large salaries for the actors. It pays for special effects and for advertisements. Art movies have small budgets. They usually have unknown or little-known actors. Some even use amateur actors. Some art films will even use regular people with no experience as actors to work as the actors. It is not uncommon for Art film directors to use friends and family members as actors.

In blockbuster movies, there is usually a happy ending. All of the problems in the story are figured out or fixed by the end of the movie. In art movies, there is often a sad ending. They can also have endings which are either hard to understand or could mean many different things. These endings are used so that the audience will have to think about what might have happened in the story.

Blockbuster movies have a large amount of television advertising, billboards and internet sites. Art films often have little or no advertising.

Blockbuster movies are very popular. This causes more movies to be made using the same story and characters. For example, the James Bond movies all tell stories about the British spy named James Bond. The Star Wars science fiction movies all tell stories about spaceships and outer space wars. Art films are very rarely made into franchises with sequels. This is because directors of art films are often trying to create a new movie with new ideas for each movie they make. Some art films do have sequels. This will most often happen when the movie was very well liked and the director wanted to tell more stories using some of the same characters.

Rarely, an art film can be so well liked that a franchise is created because of it. The View Askew universe is an example of this. Kevin Smith wrote and directed the movie Clerks. He produced the movie himself with a friend, Scott Mosier. They named their production company, View Askew Productions. This movie was an art film. It had a small budget, dealt with personal issues and its actors were mainly Smith's friends and family. Smith even played one of the characters himself. The movie was very popular and sold well when it was released on DVD. Universal Pictures, a large Hollywood studio, asked him to make a movie for them. He used two of his characters from Clerks, Jay and Silent Bob, as part of the new movie. He later used Jay (played by Jason Mewes and Silent Bob (played by Smith) is three other movies he wrote: Dogma, Jay and Silent Bob Strike Back and Clerks 2, a sequel to Clerks.

Why are art movies different from regular movies?

David Bordwell is a professor from the United States. He studies movies at a university. He thought of a way of explaining what an "art film" is in 1979. He wrote that art films are different from regular Hollywood movies. Regular Hollywood movies have a clear story and plot. Art film often have much stranger stories. In an art film, the stories may be hard to understand. As well, in an art film, the audience may have a hard time understanding what is going on. Art movies are often about people's feelings and thoughts. Art movies are often about big questions that a person has to answer about who they are or what they should do in a situation.

All content from Kiddle encyclopedia articles (including the article images and facts) can be freely used under Attribution-ShareAlike license, unless stated otherwise. Cite this article:
Art film Facts for Kids. Kiddle Encyclopedia.