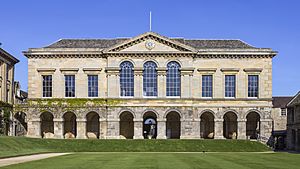 Worcester College is one of the colleges of the University of Oxford. It was founded in 1714. The college is located on the site of Gloucester College, which was founded in 1283 as place of study by a Benedictine Abbey. Eventually fifteen abbeys shared the college. In 1539 the abbeys were dissolved. For a time, the college served as the palace of the bishop of Oxford. In 1560, the buildings were purchased by Thomas White, and became known as Gloucester Hall. Some of the original buildings survive today.

All content from Kiddle encyclopedia articles (including the article images and facts) can be freely used under Attribution-ShareAlike license, unless stated otherwise. Cite this article:
Worcester College, Oxford Facts for Kids. Kiddle Encyclopedia.