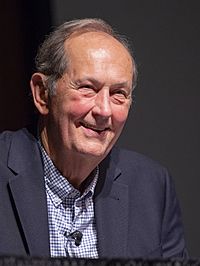 William Warren "Bill" Bradley (born July 28, 1943) is an American politician, basketball player, and educator. He was a member of the Democratic Party.

Bradley was born in Crystal City, Missouri. He studied at Princeton University.

Bradley served as a United States senator of New Jersey. He served as senator from 1979 to 1997.

He ran for President of the United States in 2000. He withdrew from the race. Al Gore would eventually win the Democratic Party ticket.

Bradley married Ernestine Bradley in 1974. Their marriage ended in divorce in 2007. They had one child. He is currently in a relationship with the director of the Lyndon Baines Johnson Library and Museum.

All content from Kiddle encyclopedia articles (including the article images and facts) can be freely used under Attribution-ShareAlike license, unless stated otherwise. Cite this article:
Bill Bradley Facts for Kids. Kiddle Encyclopedia.