The author George Eliot was born on a farm on the Arbury Estate just outside Nuneaton in 1819 and lived in the town for much of her early life. Her novel Scenes of Clerical Life (1858) depicts Nuneaton.

The Nuneaton built-up area, incorporating Nuneaton and surrounding villages including Hartshill and Bulkington, had a population of 92,968 at the 2011 census.

Towns close to Nuneaton include Bedworth, Atherstone and Hinckley, with Tamworth and Lutterworth a little further afield. The town lies 3 miles from the Leicestershire border, 8 miles from Staffordshire and 12 miles from Derbyshire.

Nuneaton's name came from a 12th century Benedictine nunnery (parts of which still exist) around which much of the town grew. Prior to this it was a settlement known as 'Etone', which translates literally as 'water-town'. Nuneaton was listed in the Domesday Book as a small hamlet. A market was established in 1233, which is still held. The first recorded use of the modern name was in 1247 when a document recorded it as 'Nonne Eton'. The nunnery fell into disrepair after 1539, with Henry VIII's Dissolution of the Monasteries. King Edward VI School was established by a royal charter in 1552. From 1944 it became a grammar school for boys and, although it was locally known as KEGS, it never included the word "grammar" in its name. In 1974 it became a sixth form college. The other grammar schools in Nuneaton in the 1944 to 1974 period were Nuneaton High School for Girls and Manor Park. Nicholas Chamberlaine School in Bedworth was an early comprehensive school that had a grammar school stream.

Nuneaton grew gradually from the 17th century onwards, due to its position at the centre of the Warwickshire coalfields. At the time of the first national census in 1801 Nuneaton was one of the largest towns in Warwickshire, with a population of 5,000. During the Industrial Revolution in the 19th century, Nuneaton developed a large textile industry. Other industries which developed in the town included brick and tile making and brewing. By 1901 the population of Nuneaton had grown to 25,000.

Nuneaton parish included the settlements of Attleborough and Stockingford. The parish was joined with Chilvers Coton parish in 1894 to form an urban district. Nuneaton was upgraded to the status of a municipal borough in 1907 and the parish of Weddington was added.

Due largely to munitions factories being located in Nuneaton, the town suffered heavy bombing damage during the Second World War. The heaviest bombing raid on Nuneaton took place on 17 May 1941, when 100 people were killed, 380 houses were destroyed, and over 10,000 damaged; several smaller raids took place on the town, most notably on 25 June 1942. As a result of the bombing, much of the town centre was rebuilt in the post-war years.

On 6 June 1975, six people died and 38 were injured when a train crashed as it was approaching Nuneaton railway station. In 2015 on the 40th anniversary of the train crash, raised money and a plaque was unveiled to remember those who lost their lives and to also remember all volunteers and members of the emergency services who worked tirelessly throughout the rescue operation 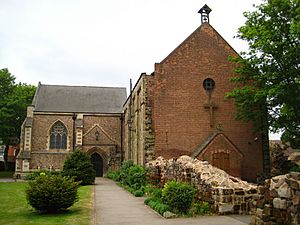 An ancient abbey church founded at 'Eaton' in the 1150s was home to Benedictine nuns and gave the present town the name 'Nuneaton'.

Little remains of the original building. The cruciform church was sold after the Dissolution and converted into a mansion. Abandoned in the 17th century it was quarried away until all that remained by the 1860s were the foundations, some low walls and the battered crossing piers of the former central tower.

In 1876–77 four of the original seven bays of the nave were rebuilt on the old foundations in Neo-Romanesque style by the Gothic Revival architect C. C. Rolfe with the old crossing piers enclosed by a temporary brick structure for use as a chancel. The west wall was left in plain brick to allow for possible completion of the nave on the ancient footings further west at a later date, though this remains incomplete.

Inside the ruined crossing piers remain from the original church, as well as part of a medieval tiled floor and the bases of what remained of the walls. Outside, the ruins of the nave and south transept remain, along with the base of what is thought to have been a chapter house.

The church (such as it stands) is used as the Parish Church of St. Mary and is known locally as the Abbey Church. The tradition of the church is Anglo-Catholic.

Despite this building's significance in Nuneaton's past and its recent history, it is a relatively unknown place, with little promotion or signage. 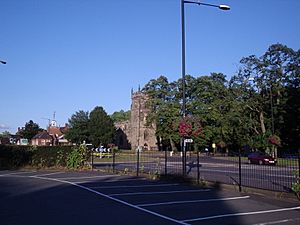 Nuneaton's name reflects the effect that Christianity has had upon the town's history. Although the Benedictine nunnery which gave the town its name was destroyed at the time of the Reformation, the remaining fragments were incorporated into the Anglican church building now known as the Abbey Church of St Mary the Virgin in Manor Court Road. This is a Victorian construction.

Near the town centre, but unusually not a part of it and outside the ring road, lies the mediaeval church of St. Nicolas- a grade I listed building. Chilvers Coton contains All Saints' Church, where Mary Ann Evans (George Eliot) worshipped and Justin Welby, now Archbishop of Canterbury, served as a curate. This was badly damaged by bombing during the Second World War, and rebuilt largely by German prisoners of war. There are also Anglican churches in Weddington (St James's), Attleborough (Holy Trinity), Stockingford (St Paul's), Galley Common (St Peter's), Abbey Green (St Mary's), and more recently built(1954), in Camp Hill (St Mary's & St John's).

There are two parishes in the town serving the Catholic community in Nuneaton. Our Lady of the Angels on Coton Road, was opened in 1838 (originally as St Mary's). The building, designed by Jospeph Hansom, was extensively remodeled in 1936. The Parish of St Anne's, Chapel End, Nuneaton was created in 1949 out of the Parish of Our Lady of the Angels (which originally covered the whole town). The original church building was replaced with the existing church, which was opened in 2000.

A Kingdom Hall of Jehovah's Witnesses is located in the Stockingford area.

In addition to Christianity, there are also followers of Islam, Sikhism and Hinduism. There is a mosque on Frank Street, Chilvers Coton and two gurdwaras (Sikh temples): the Nuneaton Guru Nanak Gurdwara in Park Avenue, Attleborough, and the Shri Guru Tegh Bahadur Gurdwara in Marlborough Road, Chilvers Coton.

A number of Jewish families have settled in and around Nuneaton over the past two centuries as local industries have grown and ebbed. Historically, families would travel for important life events and holidays to worship at the mediaeval Spon Street Synagogue in Coventry, at the short lived Hinckley Synagogue in the early 20th century and most recently, in the modern Coventry Reform Synagogue. There has never been a formal, organised community in the area and most Jewish people are now elderly, with younger more observant people moving to larger communities in London and Manchester.

The Baha'i Faith was introduced to Nuneaton in the early 1970s and now has a community of over 30 members. 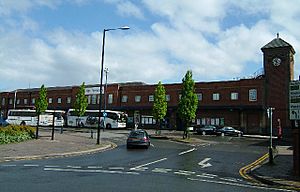 The town is near the M6, the M42 and M69 motorways and the main A5 trunk road (Watling Street), which also acts as a border with Leicestershire and the neighbouring town of Hinckley. The A444 provides a high-speed dual-carriageway route into the town from the south and also acts as the often busy town centre ring road. The A47 links the town with neighbouring Hinckley and onwards to Leicester, and the A4254 – Eastern Relief Road – provides direct access from the east of Nuneaton to the south, avoiding the town centre.

The town has two railway stations.

Nuneaton railway station near the town centre is an important railway junction, served by the West Coast Main Line running from London to the North West, the cross-country Birmingham to Peterborough Line and by a line to Coventry via Bedworth. A new railway station at Bermuda Park has recently been opened south of the town centre on the line towards Coventry, as part of the NUCKLE (Nuneaton, Coventry, Kenilworth, and Leamington) rail upgrade scheme.

The Coventry Canal passes through the town.

The main operators for buses in Nuneaton are Stagecoach in Warwickshire and Travel de Courcey. 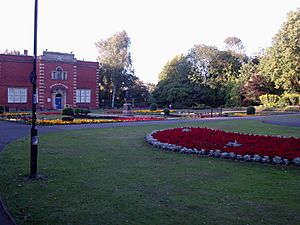 The town is also the location of Nuneaton Bowling club, where flat green bowls is played.

There are three main leisure centres in the town owned by Nuneaton and Bedworth Borough Council and managed by Everyone Active on the council's behalf (after a competitive tender process):

Nuneaton has a museum and art gallery in the grounds of Riversley Park adjacent to the town centre.

The Abbey Theatre is Nuneaton's only theatre and hosts a wide variety of performances including visiting opera and ballet companies, touring shows, musicals, pantomime and drama.

Despite there having been many in the town historically, Nuneaton now has one theatre. Run solely by volunteers, the Abbey Theatre seats 250 plus space for wheelchair patrons.

Nuneaton annually enters the Britain in Bloom competition and in 2000, Nuneaton and Bedworth was a national finalist. It is the location of Nuneaton Carnival, the largest carnival in Warwickshire, which takes place every June.

Nuneaton was home to the smallest independent newspaper in Britain (the Heartland Evening News) until it was purchased in 2006 by life News & Media.

Nuneaton has a museum and art gallery within the grounds of Riversley Park. The museum includes a display on George Eliot. Eliot's family home Griff House is now a restaurant and hotel on the A444.

Public art in Nuneaton includes a statue of George Eliot on Newdegate Square, and the Gold Belt. 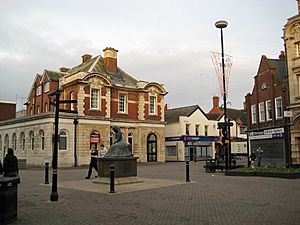 Many locations in George Eliot's works were based on places in or near her native Nuneaton, including:

The borough of Nuneaton and Bedworth is twinned with the following towns:

Districts and suburbs of Nuneaton 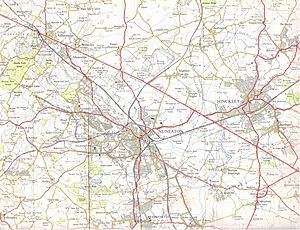 A 1961 1 inch = 1 mile series map. It covers the Hinckley-Nuneaton-Atherstone-Wolvey region. Hartshill quarry is attached to a railway and is actively operated. The coal mines near Griff Lodge Farm and Ansley Hall are in early decline. The mines are now shut and the quarry is (as far as I know) a rubbish-tip. Note the even by then removed railway by Higham Grange and Higham on the Hill.

Within the borough boundaries:

Outside the borough boundaries but often considered to be part of the town:

All content from Kiddle encyclopedia articles (including the article images and facts) can be freely used under Attribution-ShareAlike license, unless stated otherwise. Cite this article:
Nuneaton Facts for Kids. Kiddle Encyclopedia.