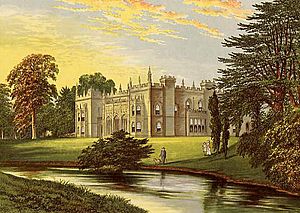 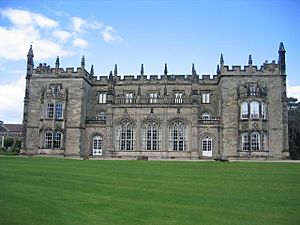 Arbury Hall is a Grade I listed country house in Nuneaton, Warwickshire, England, and the ancestral home of the Newdigate family, later the Newdigate-Newdegate and Fitzroy-Newdegate families.

The hall is built on the site of the former Arbury Priory in a mixture of Tudor and 18th-century Gothic Revival architecture, the latter being the work of Sir Roger Newdigate from designs by Henry Keene.

The hall is set in 300 acres (121 ha) of parkland. The 19th-century author George Eliot (Mary Anne Evans) was born on one of the estate farms in 1819, the daughter of the estate's land agent. She immortalised Arbury Hall as "Cheverel Manor" in Scenes of Clerical Life, where it is the setting for "Mr Gilfil's Love Story".

The film Angels and Insects was shot entirely at Arbury Hall and within the grounds. Arbury Hall was also used as the fictional Hoxley Manor in the BBC TV series Land Girls.

All content from Kiddle encyclopedia articles (including the article images and facts) can be freely used under Attribution-ShareAlike license, unless stated otherwise. Cite this article:
Arbury Hall Facts for Kids. Kiddle Encyclopedia.