Bedworth is a market town in the Borough of Nuneaton and Bedworth, Warwickshire, England. It is situated between Coventry, 5.5 miles (9 km) to the south, and Nuneaton, 3 miles (5 km) to the north. In the 2001 census the town had a population of 32,268.

Bedworth has six main suburban districts, namely Collycroft, Mount Pleasant, Bedworth Heath, Coalpit Field, Goodyers End and Exhall. Exhall is a generic name for the area surrounding junction 3 of the M6 motorway, comprising parts of both Bedworth and Coventry. Much of what is now considered Exhall within south Bedworth is also referred to as Hayes Green by locals and on older maps of the area.

The River Sowe rises in Bedworth flowing through Exhall, northern and eastern Coventry, Baginton and Stoneleigh, before joining the River Avon south of Stoneleigh.

Originally a small market town with Saxon origins, Bedworth developed into an industrial town in the 18th and 19th centuries, due largely to coal mining and the overspill of ribbon weaving and textile industries from nearby Coventry. The opening of the Coventry Canal in 1769 and later, the railway in 1850 enhanced the town's growth. Bedworth was for many years primarily a coal mining town, but the last colliery was closed in 1994. In the middle of the 19th century, the large number of public houses, and thirsty miners lead to the town being called 'Black Bedworth'.

Due to its good transport links, and proximity to major cities such as Coventry, Birmingham and Leicester, Bedworth is now growing rapidly as a dormitory town. 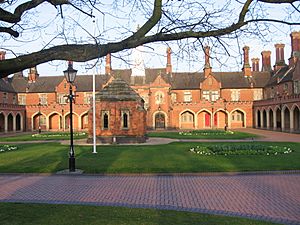 The main venue in Bedworth is the Bedworth Civic Hall which has an attached arts centre.

The Bedworth water tower is probably the most noticeable landmark building in Bedworth, built in the 1880s in the then fashionable style of an Italian campanile, it is visible from many miles around. It used to provide drinking water for the houses and the mining facilities. It was part of the 19th century development of the water supply infrastructure following the 1854 cholera outbreak in London's Soho district that was identified by Dr. John Snow as originating from a contaminated water pump, (this can be regarded as a founding event of the science of epidemiology) and the summer 1858 'Great Stink' in London. The tower was also home to a pair of peregrine falcons in 2006, before its 2012 residential redevelopment. 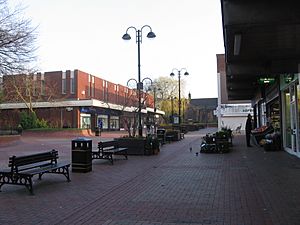 All Saints' Square – church at the far end. The almshouses are to the left out of picture. 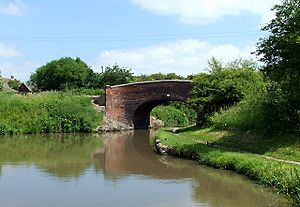 Bridge No 13, Coventry Canal, Bedworth Hill Bridge. The Act of Parliament for construction of the Coventry Canal under James Brindley was passed in 1768, and runs via Nuneaton and Atherstone to Fradley Junction near Lichfield. Completed in 1789. 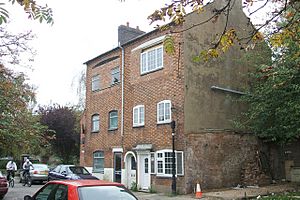 Former topshops. They were a common feature in Bedworth and Coventry's textiles industry during the 19th and early 20th centuries. The lower two floors served as the weaver's private dwelling, while the upper floor acted as the workplace. This photograph clearly shows how the windows on the top floor were once much bigger, to allow for maximum daylight.

Along Mill Street until recently were rows of former weavers' cottages which were once inhabited by Huguenot weavers. Some of these were still used as shops, although most had been allowed to become derelict. They have been demolished as part of the redevelopment of Tesco. The majority of the town centre was built in the post-war period, and has all the hallmarks of such a development. The town centre itself contains some of the usual high street retail names as well as many charity, card shops and banks.

Domestic appliance insurer Domestic & General has offices in the town centre and provides substantial employment for the community.

Several years ago Bedworth Kwik Save (a 1960s steel re-enforced concrete building with drive-on roof parking, known locally as the Hypermarket – the original name), was redeveloped into a new Aldi store. Located next to it is a Home Bargains store. Bedworth's Tesco which was a similar type of building to Kwik Save, but in a brick faced and arched windowed 1970s style, closed in January 2011 and was redeveloped into a steel framed Tesco Xtra store. Parking is at ground level, the store is on the first floor, with delivery access up a ramp to the first floor. It opened on 5 December 2011.

Bedworth has many pubs and working men's clubs. These include, but are not limited to: the Bear and Ragged Staff (a Wetherspoon pub), the White Horse, the Miners Arms, the Mount Pleasant, the Black Horse, the Black Bank, Saunders Hall, Collycroft Working Men's Club, Bedworth Liberal Club, Bedworth Conservative Club, the Griffin Inn, the Newdigate Arms, the Cross Keys, the Collycroft Goose (now closed), the Royal Oak, the Prince of Wales, JB's and Littleworks (reopened as Jack's Entertainment Club). Although, the White Swan, the British Queen, the Navigation, the Cricketers Arms, the Woolpack, the Corner Pin (demolished vacant site), the Lord Raglan – Exhall (since demolished as of late 2012 to become a Co-Op), the Orchard (converted to a Sainsbury's Local store) and others have closed, in line with national trends.

Bedworth also has a skate park built in the Miners' Welfare Park in 2001 after campaigning by local youngsters. Previous to this, most youngsters would skate in the town centre, or in the market area, much to the annoyance of residents and the local police.

A new play area, located on the site of the previous aviary and paddling pool near the cricket ground within the park, was dedicated in June 2012 to Sergeant Simon 'Val' Valentine. He was born and brought up in Bedworth, a soldier of 2nd Btn Royal Regiment of Fusiliers who lost his life in August 2009 while serving his country in Helmand Province, Afghanistan. The town centre was closed and thousands of townspeople paid their respects at Sergeant Valentine's funeral in 2009.

The town centre is dominated by All Saints' Parish Church (Church of England), which was rebuilt in the late 19th century of Runcorn stone in the Decorated style. The church has a square bell tower from the original church thought to date from 1450 which houses the town clock (1817), and a peal of eight bells, which are rung for morning services and for special occasions. The church has several fine stained glass windows; of particular note, the north aisle window is a rare example of the work of Mr. H. Clarke depicting St Peter, St Paul, St Luke and St John. All Saints' was reordered in 2000 to include a narthex, in which is held a coffee morning on Friday mornings. The church is open for visitors each morning (Monday – Friday 10 am – 12 noon). Sunday services are 9 am for Holy Communion, 11 am for family worship and 6 pm for evening worship.

St. Francis of Assisi Roman Catholic Church (a prominent building in the town centre) was originally opened in June 1883. Casting a tentative shadow over Rye Piece (a little side-street in the middle of the town), it was built at a time when Catholics were unfortunately still viewed with suspicion. It was a modest, oblong structure built in traditional Victorian redbrick with a small schoolroom running along the west side. The money to build it was raised by the priest, Fr Pius, not entirely from his sparse congregation but by simply begging all over the country. Funds for further development were supplemented by two long-running novenas dedicated to St Peter of Alcantara and St Francis Xavier.

In 1894 a school was built close to the church; whilst initially big enough to accommodate some 150 pupils aged from 4 to 14 years, it was eventually superseded by a new school. It is now a nursery.

The church itself was extended finally into its present form to be consecrated on 4 September 1923 and one of the hundreds of Catholic churches built following the Catholic Emancipation Act of 1829. A memorial to all the dedicated priests and parishioners of the past, particularly Fr Francis (1892–1912). He was a legend in his own lifetime whose French background undoubtedly influenced the unique character of the church. He acquired land around the church to build the new school, the presbytery, to build social housing and he bought an old brewery to serve as a social club. So the Catholic community which had first congregated in a disused shop in one of Bedworth's many yards, then a small chapel, finally had its own church, yet with the sanctuary at the west end and opposite to the original. Today it is in need of repair and modernisation to conform to health and safety legislation. During its long life the church has survived wars and recession, the upheavals of Vatican II, town re-development and the ebb and flow of congregations and priests. Now it stands proudly and prominently, a Victorian gem on the busy Rye Piece ring road surrounded by beautiful gardens and enhanced by a Calvary and a grotto in honour of Our Lady of Lourdes.

There are also, Bedworth Methodist Church, and the United Reformed Church in Mill Street in the town centre, Bedworth Baptist Church on Coventry Road near the football ground as well as Life Church on Bulkington Road. Zion Baptist Church is on Newdigate Road and is a striking 1977 replacement of the original 1796 chapel on High Street, which was demolished to make way for the Civic Centre (See external links.) 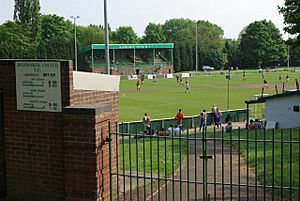 Bedworth has a non-League football team Bedworth United F.C. who play at the Oval Ground.

Bedworth now has a branch of Steve Brown Darts Academy.

Every year Armistice Day 11 November is well attended by the population, who gather in the town to watch the veterans' armistice parade that concludes with the laying of poppy wreaths at the war memorial, to pay their respects to those who fought and died in the armed forces. Local youth groups like the Girls' Brigade, and cadets march through the town as part of the parade, with bands playing commemorative music. Second World War Douglas C-47 Skytrain 'Dakota' military transport aircraft, (also known as the civilian version Douglas DC-3), scatter remembrance poppy petals over the town, aiming at the war memorial if the weather permits. Before 2005 Spitfire fighters were used. It was featured on the national TV news on remembrance days, but they were banned on health and safety grounds, from low flying over an urban area. In 2008 Dakotas were declared 'unsafe' for passenger transport by the EU, after having been safely in service since the 1930s, even staying in the air after sustaining heavy combat damage when used as the main allied transport aircraft in the Second World War . 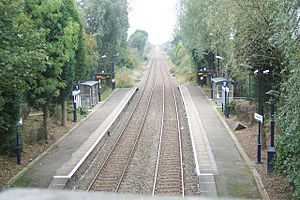 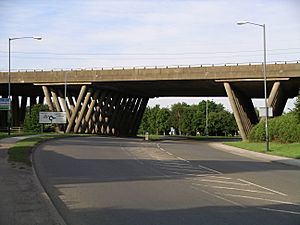 The bridge for the M6, Exhall

Bedworth has good transport links being situated immediately north of the M6 motorway at junction 3, with access via several slip roads onto the A444 dual carriageway bypass. The A444 also provides fast access to the Ricoh Arena and shopping centre and Coventry city centre.

Bedworth is also served by the Coventry to Nuneaton railway line. The current Bedworth railway station was opened in 1988 after the original station was closed in the 1960s as part of the Beeching Axe.

Bus services to the city centre of Coventry are operated competitively by Stagecoach in Warwickshire and National Express Coventry. Stagecoach also provides direct services to Nuneaton, Bulkington, Keresley, Atherstone, Hinckley & Leicester and a direct service to the University Hospital in Walsgrave, Coventry is provided by Travel de Courcey.

The Coventry Canal also runs through the town.

All content from Kiddle encyclopedia articles (including the article images and facts) can be freely used under Attribution-ShareAlike license, unless stated otherwise. Cite this article:
Bedworth Facts for Kids. Kiddle Encyclopedia.