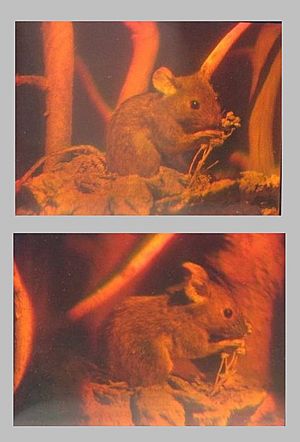 Two photographs of a single hologram taken from different viewpoints

How a hologram is made

Holograms are made with light flashed onto a plate or screen, almost like how photos are made. To make a hologram instead of a photograph, some of the light, called a "reference beam," has to go directly to the screen. The light has to be a laser because lasers are more accurate and have a wavelength that does not change the way the wavelengths of light from other sources does, like light from lightbulbs. To stop other light from ruining the hologram, holograms are usually taken in the dark. Because even the tiniest vibration can stop the hologram from forming properly, the tables upon which that the holographer places the equipment may be built with shocks or inflated chambers to stop vibrations from the floor. 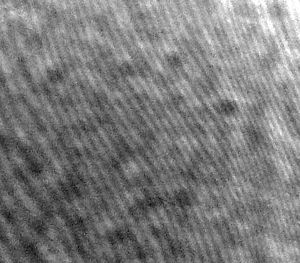 Close-up photograph of a hologram's surface. This is a hologram of a toy car.

The most famous person in the history of holography is the physician Dennis Gábor, the inventor of the hologram. In 1947, he was trying to improve microscopes, and he figured out how to display three-dimensional objects. 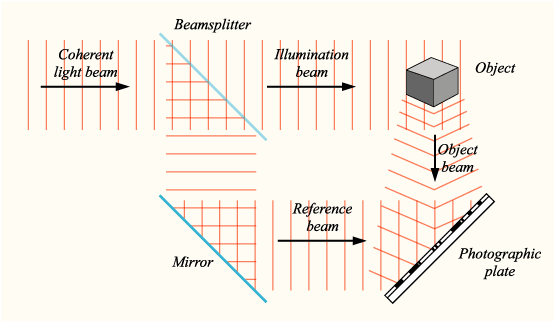 Making a hologram is very similar to making a photograph, and it needs chemicals. To look at a hologram the film must be lit up with the reference wave. These waves are reflected on the film (hologram) and create a virtual picture of the recorded object, even if that picture can only be seen from a specific angle. 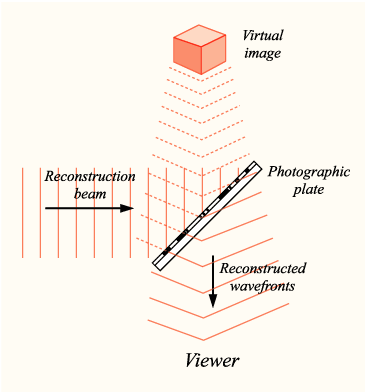 Industries use holograms to measure things. In the car industry, cars are measured using holography so engineers can see bulges and vibration characteristics. Phase-shift holography is one kind of holography used to make cars.

The first step in making a hologram is to examine the ground level state of the object, then overload the object through heat or mechanical pressure. Covering the original hologram and the modified hologram can produce interference fringes. By measuring the interference fringes, engineers learn how big the deformation or other problem is. Engineers can measure tiny terminal expansions or vibrations in mechanical systems. This needs two reference waves.

There are holographic storage machines for analog pictures and digital data. Digital information will be affiliated by a two-dimensional bit-pattern.

All content from Kiddle encyclopedia articles (including the article images and facts) can be freely used under Attribution-ShareAlike license, unless stated otherwise. Cite this article:
Holography Facts for Kids. Kiddle Encyclopedia.