The name of Lutterworth is probably derived from the Old Norse name "Lutter's Vordig" meaning Luther's farm. Lutterworth was mentioned in the Domesday Book of 1086.

The town was granted its market charter in 1214 by King John and continues to hold a market to this day, every Thursday. Usually there are up to ten stalls selling a variety of items from fruit and vegetables to clothes. 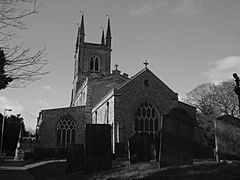 In the 14th century, the religious reformer Canon John Wycliffe was rector in Lutterworth's parish church of St Mary between 1374 and 1384, and it was here that he is traditionally believed to have produced the first translation of the Bible from Latin into English.

In the days of the stagecoach, Lutterworth was an important stopping-place on the road from Leicester to Oxford and London, and many former coaching inns remain in the town. The town also contains some historic half-timbered buildings, some of which date back to the 16th century.

Three railway stations have borne the name Lutterworth, but only one was actually in the town. The first was "Ullesthorpe & Lutterworth", about 3 mi (4.8 km) to the north west, on the former Midland Railway (later part of the LMS) line from Rugby to Leicester, closed on 1 January 1962. The second was "Welford & Kilworth", at one time known as "Welford & Lutterworth", some 5 mi (8.0 km) east on the London and North Western Railway (also later LMS) line from Rugby to Market Harborough and Peterborough, closed on 6 June 1966. The third (the only one actually in Lutterworth) was on the Great Central Railway (later part of the LNER), the last main line to be constructed from the north of England to London, opened on 15 March 1899.

Frank Whittle, inventor of the jet engine, developed some of the world's first jet engines at the British Thomson-Houston works in Lutterworth, and in nearby Rugby, during the late 1930s and the 1940s. The engine for the UK's first jet aeroplane, the Gloster E.28/39, was produced in Lutterworth. A statue of the plane stands in the middle of a roundabout just south of the town as a memorial.

Two public houses in the town have born Whittle's name, but both have now closed.

One of the established landmarks of the town is the 17th century building on the corner of George Street and Leicester Road, a tavern called the Cavalier Inn. The Cavalier Inn is located just on the northern edge of the town centre of Lutterworth and dates back to the 17th century. Although the building has been tastefully modified over the years, it still retains its rustic charm with granite walls and low ceilings and beams.

Originally called the "Ram Inn" – that part of George Street was called Ram Lane – it changed its name in the early 1970s after a brewery 'make-over' which greatly improved the interior. It is said that the brewery did not like the name Ram Inn and prudishly renamed it 'the Cavalier' after claims that wounded royalist soldiers sheltered in Lutterworth following the Battle of Naseby in 1645.

In October 2010 the Cavalier Inn closed and was changed in status to a log burning store retailing log burning fires and similar products and services.

The architect of Lutterworth Town Hall was Joseph Hansom, who took out the first patent of the horse-drawn hansom cab. He also built Birmingham Town Hall.

Another of the landmarks of the town centre is the thatched roof & timber framed building now known as the 'Shambles Inn'. This former abattoir and butcher's is the oldest timber-framed building in Lutterworth dating back to the 16th century, it was a first used as a public house in 1791 until 1840 it was then converted back to a home and butcher's shop. In 1982 it was converted back into a public house and named the Shambles.

Lutterworth lies on the A426 Leicester–Rugby road, adjacent to the M1 motorway at junction 20. It is also located within a few miles of the M6 motorway and A5 trunk road. The town once had a station on the Great Central Railway; however, since its closure the nearest railway station is now at Rugby. A southern bypass, the A4303, was opened in 1999, providing a route for traffic from the M1 to the A5 to avoid Lutterworth town centre.

Mark Corrigan of the British television series Peep Show describes a trip to Lutterworth by public transport as taking so long that it feels like going to Mordor, a reference to Tolkien's Lord of the Rings trilogy.

The 1973 sitcom "me, myself and Nigel Wright" was set in an ostrich farm near the town.

All content from Kiddle encyclopedia articles (including the article images and facts) can be freely used under Attribution-ShareAlike license, unless stated otherwise. Cite this article:
Lutterworth Facts for Kids. Kiddle Encyclopedia.