John Wycliffe (1320s – 31 December 1384) was an English scholastic philosopher, theologian, Biblical translator, reformer, English priest, and a seminary professor at the University of Oxford. He was an influential within the Roman Catholic priesthood during the 14th century and is considered an important predecessor to Protestantism.

Wycliffe's followers were known as Lollards. Beginning in the 16th century, the Lollard movement was regarded as the beginning of the Protestant Reformation.

John Wycliffe’s family lived in a lower social class, which meant they did not live in great wealth, but they were not poor either. Later, after Wycliffe had grown up, he attended Oxford University where he earned an arts degree. He became Master of Balliol College, Oxford in 1361. He was also given a parish in Lincolnshire, which meant he had to give up the position of Master. He lived at Oxford for a large portion of his life, and worked as a member of the clergy at local churches. There were many more changes to his life. Some of his ideas were in conflict with those of the Church, but he had the support and protection of John of Gaunt, who was ruling England at the time. 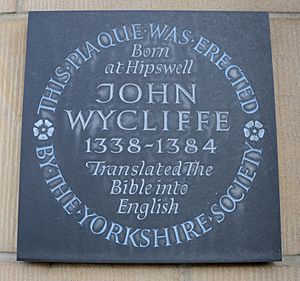 While he was saying Mass in the parish church on Holy Innocents' Day, 28 December 1384, he suffered a stroke, and died as the year ended. Wycliffe was 64 years old.

Wycliffe was instrumental in the development of a translation of the Bible in English, thus making it accessible to every day people. Several institutions are named after him:

Wycliffe is honoured in the Church of England on 31 December, and in the Anglican Church of Canada and in the liturgical calendar of the Episcopal Church (USA) on 30 October.

All content from Kiddle encyclopedia articles (including the article images and facts) can be freely used under Attribution-ShareAlike license, unless stated otherwise. Cite this article:
John Wycliffe Facts for Kids. Kiddle Encyclopedia.