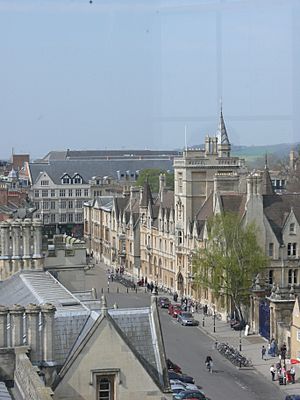 Balliol College is one of the colleges of the University of Oxford in England. It was founded in 1263 by John Balliol, father of King John Balliol of Scotland.

Usually, the undergraduate students are among the most politically active students in the university. The college's alumni include Boris Johnson, the Prime Minister of the United Kingdom, and several former prime ministers. Adam Smith, a graduate student of the college, is one of its best known students. In 2006, 45.1% of finalists got First Class Honours degrees. This is a higher percentage than any other Oxford college has ever had. The college was placed second in the Norrington Table.

All content from Kiddle encyclopedia articles (including the article images and facts) can be freely used under Attribution-ShareAlike license, unless stated otherwise. Cite this article:
Balliol College, Oxford Facts for Kids. Kiddle Encyclopedia.