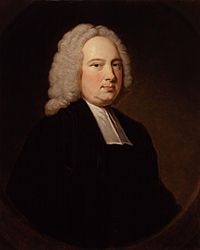 James Bradley FRS (1693 – 13 July 1762) was an English astronomer. He was born in Sherborne, Gloucestershire, England. Bradley was educated at Northleach Grammar School and at Balliol College, Oxford. He received a Bachelor of Arts degree in 1714 and a Master of Arts in 1717.

He became a member of the clergy and received an income at Bridstow in Herefordshire. Because of his friendship with Edmond Halley, in 1718 he was elected as a fellow of the Royal Society. He gave up his living at Bridstow to become a professor at Oxford in 1721. Bradley succeeded Edmond Halley as Astronomer Royal at the Royal Observatory, Greenwich in 1742. He held this post until his death in 1762.

All content from Kiddle encyclopedia articles (including the article images and facts) can be freely used under Attribution-ShareAlike license, unless stated otherwise. Cite this article:
James Bradley Facts for Kids. Kiddle Encyclopedia.