Aristarchus of Samos facts for kids

Aristarchus (310 BC – about 230 BC), was an ancient Greek astronomer and mathematician. His is the first known model that put the Sun at the center of the known universe with the Earth revolving around it (see Solar system).

Aristarchus was influenced by Philolaus of Croton, but he identified the "central fire" with the Sun, and put the other planets in their correct order of distance around the Sun. His astronomical ideas were often rejected in favour of the geocentric theories of Aristotle and Ptolemy.

His name is Ἀρίσταρχος in Greek letters, which transliterates to Aristarchos. He was born on the island of Samos, in the eastern Aegean Sea.

Heliocentrism is the idea of the Sun at the centre. Though the original text has been lost, a reference in Archimedes' book The Sand Reckoner describes another work by Aristarchus in which he advanced the heliocentric model as an alternative hypothesis. Archimedes wrote:

So Aristarchus believed the stars were very far away, which is an important step. Therefore, there was no observable parallax, that is, a movement of the stars relative to each other while the Earth moves around the Sun. The stars are much farther away than was generally assumed in ancient times; and the tiny amount of stellar parallax is only detectable with telescopes.

The old geocentric model explained planetary parallax, and was assumed to be the reason why no stellar parallax was observed. Rejection of the heliocentric view was common, as the following passage from Plutarch suggests (On the apparent face in the orb of the Moon):

Cleanthes [a contemporary of Aristarchus and head of the Stoics] thought it was the duty of the Greeks to indict Aristarchus on the charge of impiety for putting in motion the hearth of the universe ... supposing the heaven to remain at rest and the earth to revolve in an oblique circle, while it rotates, at the same time, about its own axis.

The heliocentric theory was successfully revived nearly 1800 years later by Copernicus, after which Johannes Kepler and Isaac Newton gave the theoretical explanation based on laws of physics, namely Kepler's laws for the motion of planets and Newton's laws on gravitational attraction and dynamics. 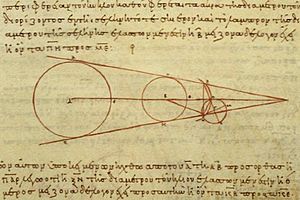 Aristarchus's 3rd century BCE calculations on the relative sizes of (from left) the Sun, Earth and Moon, from a 10th-century AD Greek copy

The Vatican library has preserved two ancient manuscripts with estimates of the length of the year. The only ancient scientist listed for two different values is Aristarchus. Both are close to the values later used by Hipparchus and Ptolemy, and the precession indicated is almost precisely 1 degree per century, a value which is too low. 1 degree per century precession was used by all later astronomers until the Arabs. The correct value in Aristarchus's time was about 1.38 degrees per century.

All content from Kiddle encyclopedia articles (including the article images and facts) can be freely used under Attribution-ShareAlike license, unless stated otherwise. Cite this article:
Aristarchus of Samos Facts for Kids. Kiddle Encyclopedia.