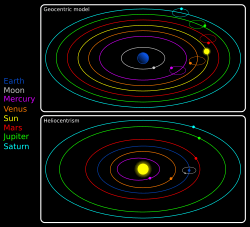 The top picture is what the solar system would look like if the Earth was at the center (geocentric). The bottom picture has the Sun at the center (heliocentric) and is what it actually looks like.

Heliocentrism is the idea that the Earth and other planets revolve around the Sun, which is the center of the solar system. Many people proposed heliocentrism, such as Aristarchus of Samos from ancient Greece, but Nicolaus Copernicus was the first to think of good reasons why it is true. This was the beginning of modern astronomy.

Before Copernicus, most people thought that the Sun and the other planets revolved around the Earth (this was called geocentrism). This is because if you stand on Earth, it looks like the Sun and stars are moving across the sky. However, when people watched for many years they saw many things that did not make sense if the Earth was the center of the Solar system. For example, sometimes the planets seemed to move back and forth instead of moving around the Earth. Copernicus explained why these things happen in 1543, when he published the book De revolutionibus orbium coelestium ("On the revolutions of the heavenly spheres"). This gave his reasons for thinking the Sun was at the center instead.

Other astronomers who made further advances after Copernicus were Johannes Kepler and Galileo Galilei. For example, Kepler showed that the planets do not orbit in perfect circles, and Galileo built very good telescopes that helped to confirm the heliocentric model.

Copernicus also thought that the sun was the center of the universe, but we now know that this is incorrect. The Sun is part of the Milky Way galaxy which is one out of billions of galaxies.

All content from Kiddle encyclopedia articles (including the article images and facts) can be freely used under Attribution-ShareAlike license, unless stated otherwise. Cite this article:
Heliocentrism Facts for Kids. Kiddle Encyclopedia.