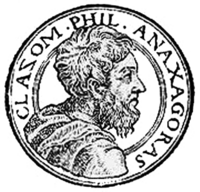 Anaxagoras (Greek: Ἀναξαγόρας, fl. 480 BC – 450 BC) was a Pre-Socratic Greek philosopher. Anaxagoras was an Ionian Greek. He was born in Asia Minor, in Clazomenae. This was a town in what is now Turkey.

Anaxagoras was the first known atheist. He also introduced the concept of νούσ (nous, or mind), the ordering force behind the Universe. But he did not take this idea any further.

He held that the Sun was not a god, but just material. It was a "red-hot mass many times larger than the Peloponnese". The Moon was a solid body with geographical features, and made of the same substance as the Earth.

Anaxagoras was eventually arrested and prosecuted for freethought. He was banished from Athens for impiety in 450 BC. However, his works were available in Socrates' day for a drachma.

All content from Kiddle encyclopedia articles (including the article images and facts) can be freely used under Attribution-ShareAlike license, unless stated otherwise. Cite this article:
Anaxagoras Facts for Kids. Kiddle Encyclopedia.