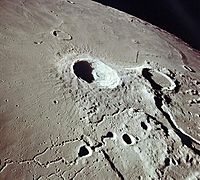 The crater as seen from Apollo 15.

Aristarchus is a large impact crater on the Moon's surface. It is 40 kilometers large in diameter and can be seen with the naked eye from Earth. The crater was named after the Greek astronomer Aristarchus of Samos. 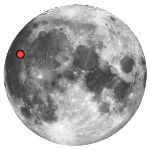 Location of the Aristarchus crater on the Moon.

Aristarchus is located on an elevated rocky rise, known as the Aristarchus Plateau, in the midst of the Oceanus Procellarum, a large expanse of lunar mare. This is a tilted crustal block, about 200 km across, that rises to a maximum elevation of 2 km above the mare in the southeastern section. Aristarchus is just to the east of the crater Herodotus and the Vallis Schröteri, and south of a system of narrow sinuous rilles named Rimae Aristarchus.

Aristarchus is bright because it is a young formation, approximately 450 million years old, and the solar wind has not yet had time to darken the excavated material by the process of space weathering. The impact occurred following the creation of the ray crater Copernicus, but before the appearance of Tycho. Due to its prominent rays, Aristarchus is mapped as part of the Copernican System.

The brightest feature of this crater is the steep central peak. Sections of the interior floor appear relatively level, but Lunar Orbiter photographs reveal the surface is covered in many small hills, streaky gouges, and some minor fractures. The crater has a terraced outer wall, roughly or polygonal in shape, and covered in a bright blanket of ejecta. These spread out into bright rays to the south and south-east, suggesting that Aristarchus was most likely formed by an oblique impact from the northeast, and their composition includes material from both the Aristarchus plateau and the lunar mare.

In November 2011, the Lunar Reconnaissance Orbiter passed over the crater, which spans almost 25 miles (40 kilometers) and sinks more than 2 miles (3.5 kilometers) deep. "The Aristarchus plateau is one of the most geologically diverse places on the moon: a mysterious raised flat plateau, a giant rille carved by enormous outpourings of lava, fields of explosive volcanic ash, and all surrounded by massive flood basalts," said Mark Robinson, principal investigator of the Lunar Reconnaissance Orbiter Camera at Arizona State University. NASA released photos of the crater on December 25, 2011.

LRO NAC image of the central peak, with colors showing variations in the composition

In 1911, Professor Robert W. Wood used ultraviolet photography to take images of the crater area. He discovered the plateau had an anomalous appearance in the ultraviolet, and an area to the north appeared to give indications of a sulfur deposit. This colorful area is sometimes referred to as "Wood's Spot", an alternate name for the Aristarchus Plateau. 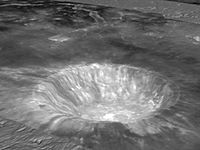 Spectra taken of this crater during the Clementine mission were used to perform mineral mapping. The data indicated that the central peak is a type of rock called anorthosite, which is a slow-cooling form of igneous rock composed of plagioclase feldspar. By contrast the outer wall is troctolite, a rock composed of equal parts plagioclase and olivine.

The Aristarchus region was part of a Hubble Space Telescope study in 2005 that was investigating the presence of oxygen-rich glassy soils in the form of the mineral ilmenite. Baseline measurements were made of the Apollo 15 and Apollo 17 landing sites, where the chemistry is known, and these were compared to Aristarchus. The Hubble Advanced Camera for Surveys was used to photograph the crater in visual and ultraviolet light. The crater was determined to have especially rich concentrations of ilmenite, a titanium oxide mineral that could potentially be used in the future by a lunar settlement for extracting oxygen.

All content from Kiddle encyclopedia articles (including the article images and facts) can be freely used under Attribution-ShareAlike license, unless stated otherwise. Cite this article:
Aristarchus (crater) Facts for Kids. Kiddle Encyclopedia.