A lunar eclipse occurs in two regions, an outer penumbral shadow where the sunlight is dimmed, and an inner umbral shadow, where much dimmer sunlight only exists by refraction through the Earth's atmosphere, leaving a red color.
This can be seen in different exposures of a partial lunar eclipse, for example here with exposures of 1/80, 2/5, and 2 seconds. 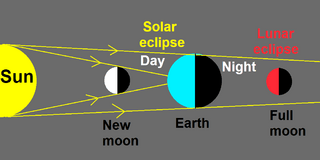 During a lunar eclipse, the Moon looks red-brown. It may be thought that the Moon is completely black because of the Earth's shadow, but the reddish-brown color is because of the fact that some of the Sun's light bends through the Earth's atmosphere and reflects off the moon.

Lunar eclipses are safe to view with just your eyes and also with telescopes. 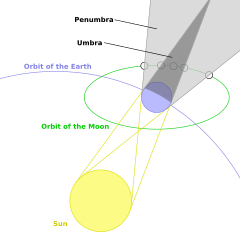 A schematic diagram of the shadow cast by Earth. Within the umbra, the central region, the planet totally shields direct sunlight. In contrast, within the penumbra, the outer portion, the sunlight is only partially blocked. (Neither the Sun, Moon, and Earth sizes nor the distances between the bodies are to scale.)

Earth's shadow can be divided into two distinctive parts: the umbra and penumbra. Earth totally occludes direct solar radiation within the umbra, the central region of the shadow. However, since the Sun's diameter appears about one-quarter of Earth's in the lunar sky, the planet only partially blocks direct sunlight within the penumbra, the outer portion of the shadow.

A partial lunar eclipse occurs when only a portion of the Moon enters Earth's umbra, while a total lunar eclipse occurs when the entire Moon enters the planet's umbra. The Moon's average orbital speed is about 2,300 mph (1.03 km/s), or a little more than its diameter per hour, so totality may last up to nearly 107 minutes. Nevertheless, the total time between the first and the last contacts of the Moon's limb with Earth's shadow is much longer and could last up to four hours.

The relative distance of the Moon from Earth at the time of an eclipse can affect the eclipse's duration. In particular, when the Moon is near apogee,the farthest point from Earth in its orbit, its orbital speed is the slowest. The diameter of Earth's umbra does not decrease appreciably within the changes in the Moon's orbital distance. Thus, the concurrence of a totally eclipsed Moon near apogee will lengthen the duration of totality. 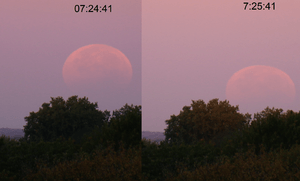 A view of the October 2014 lunar eclipse from Minneapolis, with the setting and partially eclipsed Moon appearing squashed just above the horizon just after sunrise (seen as sunlight shining on the tree in the right image)

A selenelion or selenehelion occurs when both the Sun and an eclipsed Moon can be observed at the same time. This can occur only just before sunset or just after sunrise, when both bodies will appear just above the horizon at nearly opposite points in the sky. This arrangement has led to the phenomenon being also called a horizontal eclipse.

Typically, a number of high ridges undergoing sunrise or sunset can view it. Although the Moon is in Earth's umbra, both the Sun and an eclipsed Moon can be simultaneously seen because atmospheric refraction causes each body to appear higher in the sky than their true geometric positions. 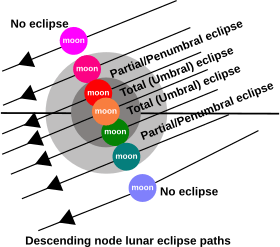 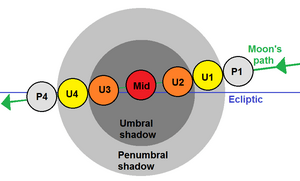 Contact points relative to the Earth's umbral and penumbral shadows, here with the Moon near is descending node

The following scale (the Danjon scale) was devised by André Danjon for rating the overall darkness of lunar eclipses:

There is often confusion between a solar eclipse and a lunar eclipse. While both involve interactions between the Sun, Earth, and the Moon, they are very different in their interactions.

In a lunar eclipse, the Moon often passes through two regions of Earth's shadow: an outer penumbra, where direct sunlight is dimmed, and an inner umbra, where indirect and much dimmer sunlight refracted by Earth's atmosphere shines on the Moon, leaving a reddish color. This can be seen in different exposures of a partial lunar eclipse, for example here with exposures of 1/80, 2/5, and 2 seconds.

The Moon does not completely darken as it passes through the umbra because of the refraction of sunlight by Earth's atmosphere into the shadow cone; if Earth had no atmosphere, the Moon would be completely dark during the eclipse. The reddish coloration arises because sunlight reaching the Moon must pass through a long and dense layer of Earth's atmosphere, where it is scattered. Shorter wavelengths are more likely to be scattered by the air molecules and small particles; thus, the longer wavelengths predominate by the time the light rays have penetrated the atmosphere. Human vision perceives this resulting light as red. This is the same effect that causes sunsets and sunrises to turn the sky a reddish color. An alternative way of conceiving this scenario is to realize that, as viewed from the Moon, the Sun would appear to be setting (or rising) behind Earth. 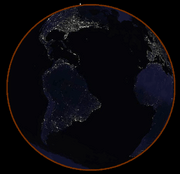 From the Moon, a lunar eclipse would show a ring of reddish-orange light surrounding a silhouetted Earth in the lunar sky.

The amount of refracted light depends on the amount of dust or clouds in the atmosphere; this also controls how much light is scattered. In general, the dustier the atmosphere, the more that other wavelengths of light will be removed (compared to red light), leaving the resulting light a deeper red color. This causes the resulting coppery-red hue of the Moon to vary from one eclipse to the next. Volcanoes are notable for expelling large quantities of dust into the atmosphere, and a large eruption shortly before an eclipse can have a large effect on the resulting color. 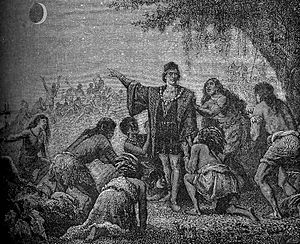 Several cultures have myths related to lunar eclipses or allude to the lunar eclipse as being a good or bad omen. The Egyptians saw the eclipse as a sow swallowing the moon for a short time; other cultures view the eclipse as the moon being swallowed by other animals, such as a jaguar in Mayan tradition, or a three legged toad in China. Some societies thought it was a demon swallowing the moon, and that they could chase it away by throwing stones and curses at it. The Greeks were ahead of their time when they said the Earth was round and used the shadow from the lunar eclipse as evidence. Some Hindus believe in the importance of bathing in the Ganges River following an eclipse because it will help to achieve salvation.

Similarly to the Mayans, the Incans believed that lunar eclipses occurred when a jaguar would eat the moon, which is why a blood moon looks red. The Incans also believed that once the jaguar finished eating the moon, it could come down and devour all the animals on Earth, so they would take spears and shout at the moon to keep it away.

The ancient Mesopotamians believed that a lunar eclipse was when the moon was being attacked by seven demons. This attack was more than just one on the moon, however, for the Mesopotamians linked what happened in the sky with what happened on the land, and because the king of Mesopotamia represented the land, the seven demons were thought to be also attacking the king. In order to prevent this attack on the king, the Mesopotamians made someone pretend to be the king so they would be attacked instead of the true king. After the lunar eclipse was over, the substitute king was made to disappear (possibly by poisoning).

In some Chinese cultures, people would ring bells to prevent a dragon or other wild animals from biting the moon. In the nineteenth century, during a lunar eclipse, the Chinese navy fired its artillery because of this belief. During the Zhou Dynasty in the Book of Songs, the sight of a red moon engulfed in darkness was believed to foreshadow famine or disease.

Certain lunar eclipses have been referred to as "blood moons" in popular articles but this is not a scientifically-recognized term. This term has been given two separate, but overlapping, meanings.

The first, and simpler, meaning relates to the reddish color a totally eclipsed Moon takes on to observers on Earth. As sunlight penetrates the atmosphere of Earth, the gaseous layer filters and refracts the rays in such a way that the green to violet wavelengths on the visible spectrum scatter more strongly than the red, thus giving the Moon a reddish cast.

The second meaning of "blood moon" has been derived from this apparent coloration by two fundamentalist Christian pastors, Mark Blitz and John Hagee. They claimed that the 2014–15 "lunar tetrad" of four lunar eclipses coinciding with the feasts of Passover and Tabernacles matched the "moon turning to blood" described in the Book of Joel of the Hebrew Bible. This tetrad was claimed to herald the Second Coming of Christ and the Rapture as described in the Book of Revelations on the date of the first of the eclipses in this sequence on April 15, 2014. 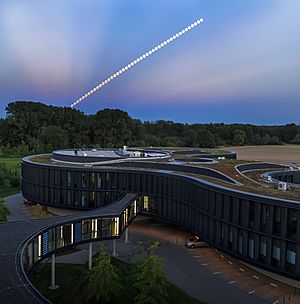 This multi-exposure sequence shows the August 2017 lunar eclipse visible from the ESO headquarters. 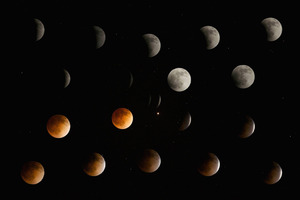 This collage shows the transitional stages of a lunar eclipse.

All content from Kiddle encyclopedia articles (including the article images and facts) can be freely used under Attribution-ShareAlike license, unless stated otherwise. Cite this article:
Lunar eclipse Facts for Kids. Kiddle Encyclopedia.